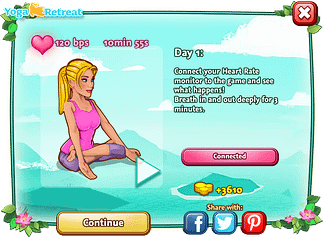 In Yoga Retreat, players embark on a journey where they manage their own yoga retreat on a tropical paradise island. The game is free-to-play and offers in-app purchases. In addition to simulation gaming and yoga self practice videos, players can now practice breathing via the Heart & Breath feature, with a new, playful breathing exercise available every day for 24 days. Players can visibly see how breathing influences heart rate when doing the practices and they are also able to follow development of their practice via statistics. For more information about the feature, visit: http://www.gajatristudios.com/heart-breath

“Breathing is at the very core of yoga and mindfulness. Deep diaphragmatic breathing enables us to be more present, improves focus, takes care of our heart, and even reduces stress. It’s fun, super-easy and can be done where ever, whenever. Both Eastern and Western medical traditions back its benefits. Even three minutes a day can make a difference,” Zilliacus concludes.

Yoga Retreat has been played by over 1M players worldwide. The game is available to download for iOS and Android devices:

Android version of the game will have Heart & Breath functionality very soon.

About Yoga Retreat
Yoga Retreat is the world’s first yoga-themed simulation game. In Yoga Retreat, players embark on a journey where they manage their own yoga retreat on a tropical paradise island. Players progress as a yoga teacher, helping customers at the retreat and teaching yoga poses and the logic of yoga. Players can expand their retreats by opening new services, such as paddleboard yoga, laughter yoga and a smoothie bar. Yoga Retreat is available for iOS and Android devices and the game has been played by over 1M players worldwide.
Facebook: http://www.facebook.com/yogaretreatgame.
Twitter: http://twitter.com/yogaretreatgame

About Gajatri Studios
Finnish Gajatri Studios is a Helsinki-based mobile games studio, focusing on integrating authentic well-being content with a fun mobile free-to-play games format. The company develops Yoga Retreat, the world’s first yoga-themed mobile simulation game, which is aimed for women who pay with their own credit cards and are into simulation games, healthy lifestyle, well-being, yoga and high quality content. Combined, the Gajatri team has over 40 years of experience in game development and publishing, from companies such as Rovio, Nokia and Digital Chocolate. For more information, visit http://www.gajatristudios.com

Bluegiga expands to new markets through US ownership
Scroll to top