’Wikipedia’ for programming skills uses Finland as a gateway to Europe 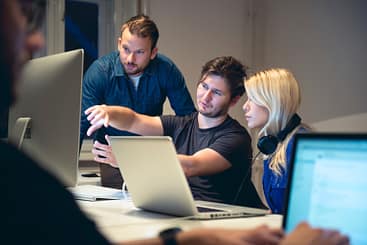 The unique feature of Hexlet, a platform for programming exercises, is that its assignments are done in a real-world programming environment which is accessible through a web browser.

Online programming lessons aren’t a novelty, but the Russian-Kazakhstan born Hexlet has brought a unique real-world element to it. Now the company is using Finland as a springboard to international markets.

Hexlet is an open platform for teaching programming which offers short two hour lessons for all developers, from beginners to the highly skilled. All lessons are comprised of two parts: theory and practical assignments – and it is the latter where the company claims to offer something truly unique.

This means that a lesson can include interaction with databases, complex frameworks and applications, multiple servers and other sophisticated tools. Despite this no downloads or installations are needed, as the Hexlet platform is cloud-based and runs through a web browser.

“We haven’t found any other programming teaching tool with the same kind of functionalities,” says Hexlet CEO Rakhim Davletkaliyev, who founded the company with CTO Kirill Mokevnin in early 2014.

“Hexlet is a bit more difficult than the likes of Codecademy, where you have a nice interface and a guy pointing to the place where you have to type a certain word. But in the real world you don’t have anyone pointing the answers to you, you have to figure them out yourself. That’s why our lessons are more realistic.“

This approach has helped the platform, which was first published in Russian last June, attract 44,000 registered users and take the first steps towards internationalisation. In January Hexlet launched the browser version of its platform (now also available in English) and was officially established in Helsinki, Finland.

All about real-world requirements

Currently most of the available lessons are the handiwork of the Hexlet team, but the platform offers tools for anyone to publish their lessons which the company will vet. Each lesson is required to focus on a specific skill so a developer can use it to learn something new without going through a time-consuming course.

“Unlike with long courses, you will not only learn a topic but also use it in practice within two hours,”Davletkaliyev says.

“Coding is a big trend now and some courses make programming seem almost too easy. Then people have difficulties using what they have learnt in the real world. In our platform you learn in a real-world programming environment,” says Hexlet CEO, Rakhim Davletkaliyev. (Photo: Hexlet)

The business model is simple. All theory lessons are available for free, but accessing the practical assignment sections requires paying a monthly subscription fee. In addition Hexlet is looking to expand the platform to meet the training needs of business customers.

“Companies, especially when developers are switching projects all the time, could use our platform and content to teach developers the skills needed in their different projects. They could also use it to teach their clients and partners,” explains Davletkaliyev.

“In the future Hexlet could be a kind of marketing and meeting place for companies and programmers. Companies showcase their expertise to potential clients by publishing lessons and programmers use the platform to demonstrate their skills to recruiters.”

Furthermore these ‘think big’ services are already under way. Hexlet has started negotiations with several Finnish companies and hopes to begin discussions in other Nordic countries in the near future.

While Hexlet is officially based in Helsinki, its four-member team is split between Russia and Kazakhstan. The company aims to employ a few people in Finland and gradually grow its operations.

“We see Finland as a gateway to Europe,” says Davletkaliyev. “We’ll continue to target Russia, Ukraine, Kazakhstan and Belarus, where most of our users are at the moment, but Finland will be our headquarters as we start to expand first to the Nordics and then central Europe and Northern America.”

But it wasn’t only location that attracted Hexlet to Finland. The main factor was the support and funding the company received from Helsinki Ventures, an accelerator and early stage investor.

“I spent a month in Helsinki as part of a customer development programme organised by Helsinki Ventures,” explains Davletkaliyev.

“The startup scene in Finland wasn’t what I expected. The surprising thing for me was the number of startups and organisations that help startups, including the government, and the amount of large companies that are really open to meeting startups and guiding them.”

Hexlet says it has been a positive experience taking its first steps toward wider markets and helped the company hone a clear and ambitious goal for the future:

“We would like to see Hexlet as the Wikipedia for programming skills,” Davletkaliyev concludes. “If a programmer needs to learn about a specific skill, the first thing that should pop into their mind is ‘I’ll check Hexlet’.”

The information security superpower in the North

IBM is opening new doors for startups
Scroll to top