Online simultaneous interpretation service Verspeak is attracting some big-name customers. Now the company is moving its headquarters to Helsinki for better access to capital, talent and the international market.

A couple of years ago, Arnold Schwarzenegger was invited to speak at the Synergy Global Forum – the largest business event in Russia. As he addressed the 20,000-strong crowd in St. Petersburg’s famed Gazprom Arena, the American’s words were simultaneously translated into Russian through an app on the phones of event visitors. That app was Verspeak.

The market for online simultaneous-interpretation services is substantial. Since Verspeak was founded in 2020, its platform has been used at more than 3000 events and B2B meetings across Russia, Brazil, France, Japan and the United States – including the annual Google I/O developer conference in Silicon Valley. The company now has more than 500 active clients.

“We started in Russia and then rapidly moved into Europe and other international markets. Today at least 40% of our business is coming from outside of Russia,” says Chief Business Development Officer Fedor Khatlamadzhiev, himself a translator and interpreter.

“Verspeak is designed by interpreters for interpreters. We’ve built it based on a lot of feedback from these professionals and have created a platform that’s really easy to use for both interpreters and listeners alike,” he says.

While Verspeak has made the front-end simple to use through an app or a browser, running a simultaneous-interpretation service at scale requires some complex back-end technology. The core idea is based on a methodology for transferring audio-visual signals over WebRTC servers. This is the brainchild of Ruslan Musin, the company’s main founder and the winner of Russia’s Startupper of the Year competition in 2019. 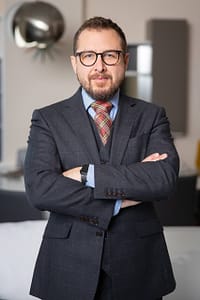 Ruslan Musin won Russia’s Startupper of the Year competition in 2019.

“We’ve completely built our own back-end system based on WebRTC servers, as they’re robust enough to provide the kind of reliability we need. We can do real-time broadcasting of sound and video with a delay of just 0.2 seconds,” says Musin. “Now we’re beta-testing a new video-conferencing system that we’ll soon launch bundled with professional interpretation services.”

Verspeak has more than 3000 interpreters in its talent pool, while the service itself is managed by a technical team of 10. The company’s Head of Sales is Ilya Timoshkov, and Chief Operating Officer is Alena Melnikova. She will lead the company’s HQ in Helsinki and focus on growing the team.

“In order to realize our international ambitions we have plans to hire some 100 new people in the next 12 months, mostly in sales, marketing and technical roles. It will be much easier for us to recruit international staff in Helsinki than in Moscow,” says Melnikova. 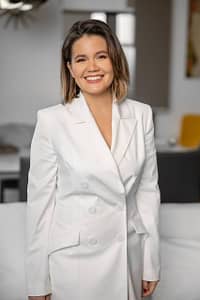 Alena Melnikova, COO, will lead the company’s HQ in Helsinki.

The management team of four – Musin, Melnikova, Khatlamadzhiev and Timoshkov – visited Helsinki earlier this year after Business Finland got in touch with them to explain some of the benefits for international startups setting up in Helsinki. All four will move to Finland before the end of 2021. Once they’re settled, other Verspeak staff members will be offered the option of relocation too.

“Finland is working really hard on developing its attractiveness for startups. Business Finland helped us get a startup permit quickly and we also got our individual residence permits in just a few months. No other country presented us with such convenient terms for relocation,” says Khatlamadzhiev.

“Helsinki Business Hub has also done a lot for us,” he says. “They get in touch at least once a fortnight to check on our progress and see how they can support us with introductions to potential clients and investors, as well as with information about office space and places to live.”

“Finnish society is stable, transparent and people trust in the government. We really appreciate all these things too.”

12 tech startups in Helsinki you should already know about