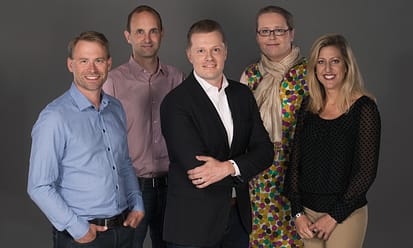 With the help of Trademark Now’s search engine companies can, when developing a new brand, check the availability of the trademark.

How much is ten thousand working hours in euros? The customers of Trademark Now have reported daily savings of thousands of euros due to the product of the Finnish startup. Within the company itself, the amount of working hours is rapidly increasing: from the four co-founders the group has now grown to fourteen.

– By the end of the year there’ll be about twenty of us, and in 2016 hopefully a hundred, predicts the CEO of Trademark Now Mikael Kolehmainen.

With the help of Trademark Now’s search engine companies can, when developing a new brand, check the availability of the trademark. Kolehmainen and the chief scientist Anna Ronkainen say a process that used to last weeks can now be dealt with in a matter of seconds.

– Normally the marketing team comes up with alternatives for names and passes them on to the legal department or an external law firm; then experts create a list of different search terms that are being searched for and analysed. After the analysis the marketing team gets a report which often deems the name unsuitable, and they will need to come up with a new one, explains Kolehmainen.

For a regular Joe unfamiliar with trademark legislation all the hassle might sound unreasonable. Wouldn’t a simple Google search be enough to find out if the trademark is already in use? Kolehmainen points out that a normal search engine might find another brand with the exact same name, but in the eyes of the trademark register that doesn’t quite cut it. For example, phonetic and semantic similarities and the potential unpleasant meanings associated with the name need to be taken into account, too.

– At that point the searching tends to get quite complicated for an average consumer, Ronkainen and Kolehmainen say.

Trademark Now also finds out how actively the owner of a previously existing trademark has defended the brand. The end result is a risk analysis that estimates whether or not the name is likely to be accepted onto the trademark register.

On the way to the world

The idea of making a machine work through the legal reasoning process doesn’t only fascinate the founders, but investors as well. In May Balderton Capital invested 3,5 million dollars (2,5 million euros) in Trademark Now.

Some of the money will be spent on hiring new employees. The headquarters are in downtown Helsinki, and the company has a one-employee office in both London and Luxembourg. In September an office in New York will be opened.

The aim is to expand both in terms of services and geography. In the future Trademark Now might recognise similarities in logo design and set its foot into the vast market of China.

Product development is, and will stay, in Helsinki. Being Finnish is a quintessential part of the company’s identity. Kolehmainen has proven the good reputation of the high work ethic and high quality education Finland has around the world during meetings with customers.

– In New York some lawyers were really excited about the fact that the product comes from Europe, and even more so from Finland. They said they would never trust it if it was brought to them from Silicon Valley.

Machines can do the boring stuff

Some might say Kolehmainen’s got it in for his old colleagues, as the product seems to be well on the way to making them redundant. However, Kolehmainen and Ronkainen point out that computers can never completely replace human reasoning.

– We intend to dispense with the boring and mechanical phases of the process. That way lawyers can focus on more interesting tasks, for which customers are willing to pay full money.

The customers of Trademark Now pay the company an annual fee that entitles them to an unlimited amount of searches. Hence Trademark Now targets big corporations for which new brands are a part of everyday work. Despite this the company doesn’t forget its peers, enthusiastic startups full of great ideas. Hence it is possible to purchase the license for just a day, too.

– Then the potential names can be checked right away whilst brainstorming for new ideas, says Kolehmainen.

At the heart of Finnish economic life sits the Port of Helsinki – a true trade...