The first extensive showcase of Finnish design in Japan, HIRAMEKI Design × Finland 2010, was arranged in 2010 in Tokyo. The completely new concept presented a wide variety of current Finnish design and created new hues and opportunities for Fenno–Japanese design collaboration. 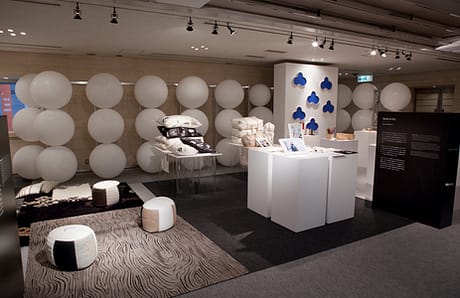 The Finnish design community was given an unbeatable opportunity to present itself in Japan last year. The idea was born when the former Minister of Culture and Sport Stefan Wallin was visiting Japan and discussing the Finnish design scene. Enthusiastic as they were, the Japanese offered an exhibition space to give a complete update of the state of Finnish design.

Design Forum Finland together with The Finnish Institute in Japan, Living Design Center Ozone, Aalto University and Finnish Design Management Association started to build the project together. In addition, sponsors and active partners, like Visit Finland, Finnair and Finnfacts, supported the project.

The spark of Finnish design

The aim was to create something different from an ordinary exhibition, to give an insightful image of the state of Finnish design. Scandinavian design is well-known in Japan, so it was very essential to find ways to differentiate from the familiar.
The team created a concept of Hirameki, an epiphany, spark or inspiration: a broad overview of Finnish design was presented through six colour-themed sparks, each colour representing different view point of Finnish design. The categories showcased the authors and icons behind the scene, design agencies, sustainability issues, manufacturing industry, Finnish production, as well as new attitudes towards design.

The curators of the exhibition, Finnish designers Harri Koskinen and Ilkka Suppanen, collected together with Design Forum Finland’s Project Managers Sirpa Fourastie and Hanna Punnonen altogether 1,000 items from 64 different participants, of which 22 were companies, 9 design agencies and design collectives and 33 designers each with a company status. In Living Design Center Ozone, Finnish design took over three floors and 7 galleries totalling 1,200 m2 for 10 whole days.

It was of utmost importance that the Japanese agents understood how the cooperation could work with Finnish designers. Hence, the team hired a Japanese business consultant to give more depth to the interaction between Finnish and Japanese designers during the event. Also Design Forum Finland offered the participants training and possibilities to communicate their own agenda.

An integral part of the project was matchmaking: each participant was brought together with buyers, importers and manufacturers looking for updated material or design for different development project. The participants estimated to have had 2–5 discussions with Japanese contacts, and several were created after the event.

The exhibition featured in the Japanese business news as an example of exporting design. It also got good media coverage, altogether 77 articles, e.g. in Elle Deco, Vogue and GQ. Additionally, the local press feedback nominated HIRAMEKI Design × Finland 2010 as the best event of Tokyo Design Week.

Cooperation with the exhibition brought good reputation also for the Japanese partners: exhibition design of HIRAMEKI Design × Finland 2010 got Industrial Incentive Award from Nippon Display Federation, which was officially announced 6 December 2011 in Tokyo. The collaboration with MURAYAMA, Japanese subcontractor of exhibition construction, brought this unexpected and magnificent result.

In autumn 2011, the Hirameki concept continued with a pop-up store: The Love Chair Collection with HIRAMEKI Design × Finland presented Finnish and Japanese design chairs that were also sold in Isetan Shinjuku Store.

Design Forum Finland is in fact planning to adapt the Hirameki concept for other purposes, e.g. in different geographical areas.

Helsinki prepares for its reign as World Design Capital

Rocla is leading the way in design management
Scroll to top