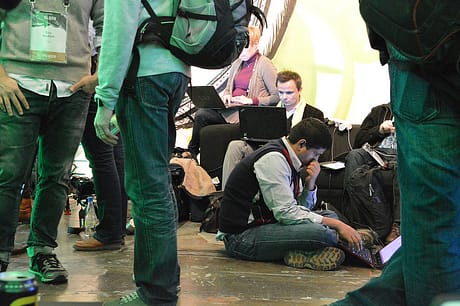 Slush13 was proof positive that the startup scene in Northern Europe is alive and buzzing. Recent investment news in the gaming sector are attracting investors and gaming companies to check out the talent potential in Finland and the Nordics. While gaming might be on everyone’s lips, there are increasingly many eyes on the healthcare startups as well, broadening the potential for new successes in the future.

November in Finland can be harsh, with cold winds sweeping in from the north and the pre-winter slush chilling the atmosphere. This is exactly the weather that calls for a sizzling event like Slush13 to bring people together indoors and in closed quarters to discuss the future of the startup scene in Northern Europe. Recent investment news in the Finnish gaming sector are attracting investors and gaming companies to check out the talent potential in Finland and the Nordics. This year, Slush had a strong Russian flavor as well, with Skolkovo Innovation Center bringing in it’s best and brightest to mingle with their peers and with international investors.

Initial Capital co-founder Kristian Segerstråle, with a strong background as gaming entrepreneur and early stage investor, keeps a keen eye on the North European startup scene from Silicone Valley and has noted that the industry is doing really well. “Not only do you have these mega successful game startups like Rovio and Supercell, but you also have a whole set of growing companies within robotics and health sciences. They are leveraging, not only the broad set of technical skills but also increasingly the hardware and broader business building skills. From the outside, it looks like the momentum is pretty incredible right now.” Segerstråle muses. And he ought to know, having served on the Supercell board of directors until the finalization of the GungHo investment. (see Kristian Segerstråle’s interview from Slush13)

Some global gaming companies joined Slush this year for the first time. Tim Symons, Project Development & Game Evaluation Manager at Nintendo Europe was guided by the strong notion that there are gaming skills in Finland that should be studied further. “There are a lot of creators of content that appeal to a global audience, like Angry Birds, Minecraft and Alan Wake. We’re here to find talent and to work with developers. To find out what brings innovation to Finland.”

Japanese gaming and entertainment company CROOZ turned eyes on the Finnish gaming scene after the recent Supercell transaction with Japanese giant GungHo. “The Finnish mobile game development studios are really attracting the attention of global companies and we are one of them. We’ve been researching for the areas where good developers work. We’ve had some really good, interactive discussions about what they think about Japanese market and what CROOZ thinks about the European markets”, says Tetsuma Ueda, Business Developer from CROOZ.

Taking elements of gaming, such as motivational tools and social sharing, familiar from games like Angry Birds and Clash of Clans, are also being used in educational apps and services such as Math Elements, created by Skillpixels. The mobile game teaches kids to use math to gain advantage in helping their smartphone pet mice beat the cats in a cheese labyrinth. The game recently received the Best Educational Solution award in the Best Mobile Service Award in Finland 2013 competition. BetterDoctor, a service built for the American markets, helping to speed up finding the right kind of doctor, in your geographical location who accepts the your insurance plan, won the best Demo Showcase prize at Slush13. Having secured 2.6MUSD seed funding earlier in 2013, BetterDoctor has already grown the online customer base from the initial 100 000 monthly users to 1 million monthly users. (Take a look at co-founder Ari Tulla’s interview about building Better Doctor)

All in all, the buzz made by the Slush goers was loud and enthusiastic, adding to the positive beat of the Northern European startup scene.

Finland ranked as number eight in the world for its ability to attract tale...
Scroll to top