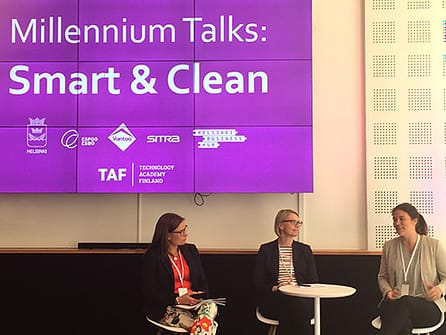 Wide ranging collaboration on smart and clean technologies in the Helsinki capital region came off to an impressive start, as a large number of sector businesses and experts gathered to Millennium Talks: Smart & Clean – From New Energy to Business to discuss how the technologies can be used to generate new business opportunities for the area.

The Smart & Clean Foundation, recently established by the Finnish innovation fund Sitra, is tasked with establishing the capital region as a world-class test platform for clean and smart solutions, which are very much in demand as the world, undergoing rapid urbanisation, seeks to reduce its dependence on fossil energy.

According to the foundation managing director Tiina Kähö, Finnish cities, businesses and research and development bodies possess significant know how and ready made solutions that, together, can place Finland at the forefront of the efforts to solve the global sustainability challenges.

“Clean technologies aimed at consumers that are both sustainable and designed to make our everyday lives that little bit easier are crucial to this.”

“What are the solutions that we all can put to the test right now and start applying in our everyday lives,” Kähö asked the assembled audience.

She urged the audience members to commence broad-ranging and open-minded discussions on projects for collaboration with Sitra.

At the forefront of sustainability

According to international research findings published in April, Espoo in the most sustainable city in Europe. The keynote speaker at the event was the academic responsible for the study, Professor Kees Zoeteman, from Tilburg University in the Netherlands.

In his address, Professor Zoeteman explained that the study, unprecedented in its scope, applied nearly 100 different indicators to evaluate the environmental, financial and sociocultural sustainability of more than 140 European cities.

The analysis showed that the most sustainable city in Europe is Espoo, while neighbouring Helsinki was ranked fifth. Another neighbour, Vantaa, was not included in the study. The sustainability factors included population size, geographic location and typology, including the balance of industry and agriculture, as well as competitivess, such as workforce productivity.

“You could say that together, Espoo, Helsinki and Vantaa form the most sustainable urban and geographic entity in the world,” Zoeteman said.

“The strengths that you ought to focus on are the circular economy, energy solutions, air quality and the role of arts and culture in society.”

In his speech, the mayor Jukka Mäkelä noted that smart and clean solutions are important to Espoo as they align with the city’s values and objectives.

The event’s second keynote speaker, Jenny Josefine Holen from the City of Oslo explained how Oslo became a city for electric cars.

“Currently, 30% of all vehicles sold in the Oslo area are electric cars. We are setting our sights at 100%.”

In Oslo, the number of electric cars has seen steady growth for some time. The challenge has been to continue to provide sufficient charging points.

“The key role for the city is to provide the charging infrastructure and in Oslo we still have a lot of work to do”, Holen said.

The Millennium Talks: Smart & Clean – From New Energy to Business event was held at the health-tech start-up accelerator Vertical’s premises in Otaniemi on 23 May and formed part of the Millenium Week organised by Technology Academy Finland (TAF). The event was organised by the cities of Espoo, Helsinki and Vantaa, Sitra and the Helsinki Business Hub.

Antti Aumo: 10 fascinating cases why Helsinki makes a difference as a business...
Scroll to top