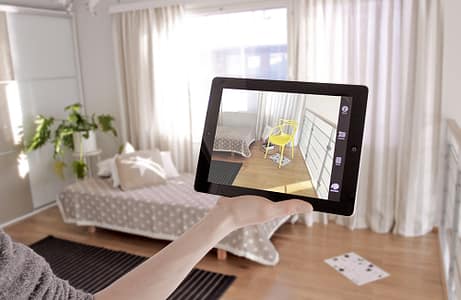 Finnish Sayduck raised 350,000 euros of seed funding, which it intends to use to boost growth and product development.

Sayduck, a Helsinki-based company specializing in online shopping enhanced by augmented reality, has raised 350,000 euros of seed funding, mainly from international investors. The company intends to use the funding to boost its growth and product development and to expand to the US market.

Sayduck sprouted partly from personal need – CEO Mikko Martikainen and other Sayduck founders are not avid furniture store visitors. However, buying furniture online was difficult, as small photos rarely give a realistic idea of how a chair or a bookcase would look in one’s own living room. They developed a solution that enables users to place furniture in their home virtually to see how it would look.

The technology is called augmented reality. With Sayduck’s application, users only need to point their smartphone camera to the spot where they wish to see the new piece of furniture. The application combines the real environment of one’s home with the digital picture of the desired piece of furniture. If the user is satisfied, he or she can purchase the product online.

— Initially our application was built for furniture but we are now expanding its use to fashion, particularly handbags and shoes. It enables trying how e.g. a new purse would look with a certain outfit. For companies, this offers enhanced online sales as they can bring their products virtually to the customer’s home, said Mikko Martikainen.

Investment to carry the company over the Atlantic

Sayduck recently raised 350,000 euros of seed funding mainly from international investors. The company already has a few clients in the United States and plans to set up a sales organization there. The funding helps in crossing the Atlantic but before that, Sayduck intends to use it to recruit additional staff and to further develop its product.

At the moment, Sayduck has offices in Helsinki and London, and sales representatives in a few other countries. It has 15 employees and runs operations from software development to sales and marketing.

— The investment helps boost our growth. We plan to hire 10 more employees within the next year, mainly in Finland and the US. The Finnish market is an important test field for us, because we have a couple of very forward-thinking Finnish furniture manufacturers as partners. These partnerships help us test and develop our application, said Martikainen.

In addition to growing and expanding its solution to strong fashion brands, Sayduck aims to make its application as easy and straightforward to use as possible.

— Augmented reality often focuses too much on technology at the expense of the end-user. We operate a bit like Apple, that is, we work on a few carefully thought-out things but do them as well as possible, Martikainen said.

The strategy appears to be working. Sayduck’s clients already include Alessi, Inno, Adidas and Onitsuka Tiger.