Samocat Sharing, a startup based in the Skolkovo Innovation Center in Moscow, and the City of Espoo will start piloting Samocat’s kick scooter sharing service in Otaniemi in the summer of 2017. The collaboration is a bold move both for a foreign startup piloting its service in Finland as well as for a Finnish city looking for forward-looking smart mobility solutions. Samocat is also setting up its EU base in Espoo and will use it to expand to the rest of the continent. Samocat’s kick scooters will roll to the streets of Espoo during the summer 2017. In the picture Samocat’s founder Sergey Pisarenko.

“We had presented our idea to a few other cities in Europe, which all thought it was a promising one, but the City of Espoo was eager to start collaboration right away. At that point, Samocat had developed from one man’s crazy idea to a successful startup in the GenerationS acceleration program in Moscow. The market for smart mobility had grown rapidly in just a couple of years,” says Bykov, now CEO of Samocat.

“Helsinki Business Hub works very efficiently to attract new companies and investments to the Helsinki area. We were basically able to meet everyone we needed to – the Helsinki region ‘innovation gang’ – around one table. That helped us come to a quick decision. We know that there will be challenges but that’s why we are running a pilot first,” says Pisarenko.

The pilot will run from August until November 2017. It is funded by the City of Espoo and Aalto University, and Samocat has also applied for Tekes financing. Samocat will use the data from the pilot to develop the usability and business model of the service and to expand it in Otaniemi as well as around the country. The City of Espoo will utilize the pilot to develop its own transportation system, including new last mile solutions. 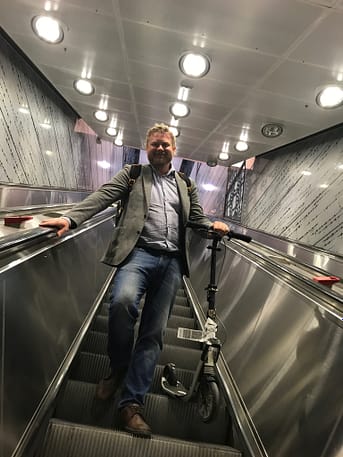 Kick scooters have traditionally been used as toys. Only in the past decade or two, people have started to view them as transportation devices. Samocat’s kick scooters are robust and durable. They are cheaper than shared bikes, and can therefore be developed into a profitable service without large public subsidies, sizable investments, and long payback periods. Kick scooters also require less space and weigh less than shared bicycles. They can easily be brought on a bus or a subway.

“Kick scooters are excellent for traveling short distances like for sightseeing or the last stretch from public transportation to work or home. Our service complements bike sharing. Around 50 percent of all rides on shared bikes are less than 1 kilometer in length, a distance perfectly suited for kick scooters,” says Vasilii Bykov.

Samocat’s kick scooters are used with a smart phone and a mobile app, available in Apple’s App Store, Google Play and the company’s website (www.samocat.net). Users sign in with their credit card and can then unlock and lock the kick scooters as they need.

From Espoo to Europe

Espoo is the first European city outside Russia that Samocat is expanding to, and the company has decided to stay and use Espoo as a base to grow its operations. Samocat Sharing Oy was established in May 2017 and works currently at Urban Mill, a startup hub in Espoo. It has already started hiring employees.

“The Helsinki capital region is a great testbed and platform for a company like Samocat. It’s a leading area in Mobility as a Service solutions and has a very low vandalism rate, so we are looking forward to integrating Samocat into the local MaaS solutions. We intend to use the Otaniemi EU pilot as a reference case for expansion to other Finnish cities, then to Sweden and Norway, and eventually around the globe,” says Bykov.

“The City of Espoo has also been very welcoming and open-minded to our solution. The collaboration involves an entire network of organizations from the City to Aalto University and its student union as well as Espoo Innovation Garden,” says Sergey Pisarenko.

“We are very pleased that a company like Samocat wants to run its first EU pilot in Espoo. Espoo is a city of high education and expertise. Openness, experimenting and looking for new solutions is vital to us. Innovation is at the heart of Espoo,” says Manager of Economic and Business Development Harri Paananen from the City of Espoo.

And innovation comes in many forms, from high-tech to social innovation. It can be about taking something old and developing it into a new solution that facilitates our everyday life. And that’s exactly what Samocat has done. It has developed what was once a toy into a transportation service that saves time, benefits one’s health and is a lot of fun.

Kick scooters are excellent for traveling the last mile from public transportation to work or home. Samocat’s kick scooters are used with a smart phone and a mobile app, available in Apple’s App Store, Google Play and the company’s website (www.samocat.net).

Helsinki-based Blueprint Genetics secures €14M to further expand with its...
Scroll to top