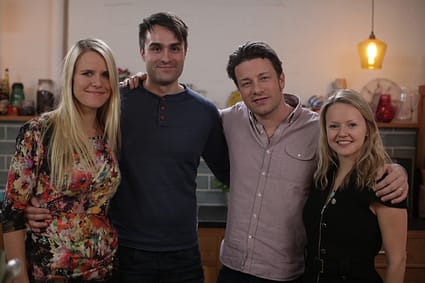 “We believe in micro-actions because change rarely happens overnight. Your
wellbeing is the sum of all those small actions you take every day, and every choice you make is significant,” says Nelli Lähteenmäki, CEO and Co-Founder of Fifth Corner.

Finnish Fifth Corner gives an alternative to the quantified self trend and targets the fun and inspirational side of wellbeing. Its approach is backed by $550K of new funding – and Jamie Oliver.

Helsinki-based Fifth Corner has moved fast. The company was only founded in 2014 as a spin-off from Finnish health technology startup Health Puzzle and already has attracted users from over 100 countries to an early access version of its You-app on iOS.

– We wanted to take a more good-hearted approach to improving wellbeing. Our aim is to make health fun, inspirational and approachable as well as to promote the idea that small actions will lead to major change, Nelli Lähteenmäki CEO and Co-Founder of Fifth Corner.

– We believe data-heavy measuring and dashboards can be useful for some, but do not inspire behavioral change in all of us.

The You-app promotes a healthy lifestyle through bite-sized daily micro-actions and only asks its users for a minute per day. Actions fall into four categories: food, love, mind and exercise and tasks vary from doing 10 squats to taking a minute for yourself to appreciate your environment or changing part of your evening meal.

Users show they have completed their action by taking a picture of it and sharing that with their friends and followers.

This approach makes the You-app stand out from the mass of existing fitness trackers and wellness apps focused on quantifiable data and measuring everything from steps and sleep to heart rate and calories.

While lighthearted, the ideology of micro-actions is based in science. To create sustainable change, researchers and neuroscientists advocate small steps, rather than changing your whole life at once.

– You-app started to take shape when we realised that the first challenge to solve is how to inspire people to change their behaviour, explains Lähteenmäki .

– We believe in micro-actions because change rarely happens overnight. Your wellbeing is the sum of all those small actions you take every day, and every choice you make is significant.

Moving away from data crunching fitness tech has also attracted international backers. Fifth Corner’s seed-funding round of 550,000 dollars (approx. €450,000) was led by London-based venture capital firm Wellington Partners and angel investors from the UK and Finland.

Fifth Corner aims to use the funding mainly to boost product development as the company prepares to release the full version of its app for iOS and Android in the next few months. There are also plans to grow its existing team of nine engineers and designers during 2015.

– We want to hone the app to its peak before full launch and we are also looking for a few more people to complement our great team, Lähteenmäki explains.

– Helsinki has developed a lot as a startup hub, but it is still a good idea for startups to go outside Finland at an early stage to learn and build networks.

Add a pinch of Jamie Oliver

Fifth Corner has one more ace up its sleeve. The You-app is backed by celebrity chef Jamie Oliver and his team who are working with the company on the app’s content and user experience. Oliver, known for his passion promoting healthy living, has also been a vocal advocate of You-app regularly promoting it to his millions of followers on Twitter, Facebook and Instagram.

– You-app has started off very well and a major factor in this is our partnership with Jamie. He has an incredible reach. There’s a large audience that appreciates him and loves his positive and inspirational way of doing things, Lähteenmäki says.

Fifth Corner was introduced to Oliver by one of its investors. Both share the same vision of inspiring people to take action towards a healthier lifestyle and the collaboration between the teams started quickly to advance You-app’s philosophy of “small things matter”.

– It’s tragic that so many start the year with a resolution to change their lifestyles, but 90 percent will fail because they have tried to bite off more than they can chew. Our team would like to see micro-actions to become the next big thing, explains Lähteenmäki.

-In the end, it’s the small decisions that matter the most.