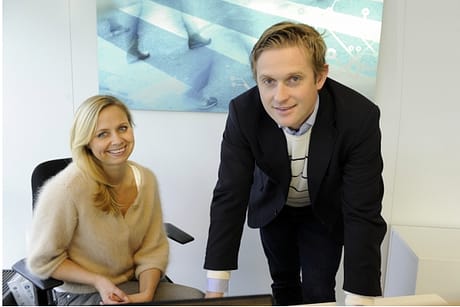 Norwegian ABAX opened an office in Finland in March. In the photo: Ann Kristin Ramberg and the head of the new Finnish office Håkon Grønn-Weiss.

ABAX, a Norwegian company specializing in vehicle tracking and fleet management, has opened an office in Finland in March. The company plans to hire 18 people in the Vantaa office by August and 30–35 employees in the next couple of years.

ABAX offers triplog and vehicle tracking services as well as equipment and fleet management. Its customer base consists mainly of small and medium-sized companies that use company cars, for example plumbing and construction services. ABAX’s equipment is developed in Norway and manufactured in Lithuania.

— Our service is based on a subscription model that is extremely scalable, which means that our customers get both the equipment and the continuing service. Most of our competitors buy their equipment in China. We develop and manufacture our equipment, which guarantees tight integration and gives us control over the entire value chain, said CEO Petter Quinsgaard from ABAX.

ABAX’s Finnish office will – at least initially – concentrate on sales and marketing and it will serve the entire country. Opened in March, the office already has eight employees.

— We aim to be first and foremost a Nordic company. As we already had offices in Norway, Denmark and Sweden, Finland was the next logical location, said Håkon Grønn-Weiss, head of the new Finnish office.

ABAX started planning the new office before Christmas. It received help from Invest in Finland and has also relied on the support of recruiting and communications firms as well as tax and advisory services.

— Launching an office in Finland was actually easier than launching offices in other Nordic countries. We have been warmly welcomed in Vantaa and Finland. Regulation here is similar to other Scandinavian countries, as are customer needs. The infrastructure is very good and all services are readily available, said Grønn-Weiss.

Quinsgaard and Grønn-Weiss say that the goal of ABAX’s Finnish office is to be the best provider of triplog and vehicle tracking services and to gain a couple of thousand customers in the next two or three years. The company plans to recruit 18 employees in Finland by August and 30–35 employees in the next couple of years. They are currently recruiting.

— Our number one goal, however, are happy employees. Our number two goal follows directly from that: happy customers. We don’t give our employees sales goals; we let them set their own goals. When they are happy, they commit and stay with us and achieve good results. Enthusiasm is the key, said Petter Quinsgaard.

While many other companies are limping through the recession, ABAX leaps forward.

— ABAX has grown in spite of the European economic crisis because we help customers cut costs and reduce expensive and unnecessary manual labor. During a recession companies want to streamline their operations, and that’s what we can help them do, said Quinsgaard.

Article is published in cooperation with Good News from Finland