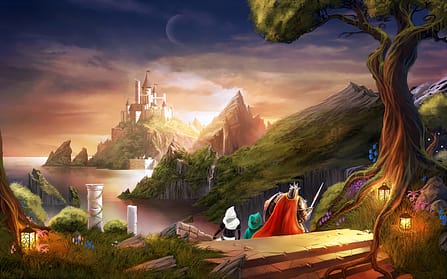 Nintendo recently launched a fully localised Japanese version of Trine 2 – a video game with a unique game-play mechanic and simply breath-taking visuals. Trine 2 is designed by Frozenbyte, an independent Finnish game-developer. How did the Japanese video game giant and the folks from the cold if not frozen north come together?

Play Trine 2, and a forest of mystery and the power of three heroes will enchant you. The side-scrolling action platform and puzzle video game allows three players to play the iconic roles of a wizard, a thief, and a knight in a simultaneous co-operative mode.

“Trine 2 is a charming, storybook-like video game, set in a stunning fairy-tale world. It is a beautiful visual experience, and that is the biggest attention grabber for a lot of people. Once you actually get to the playing part, the combination of puzzles, platforming, and action is what makes the game fun,” Kai Tuovinen, Marketing Manager of Frozenbyte, describes the game.

Trine 2 is now officially released for the Nintendo Wii U console in Japan.

”The game has quite a strong universal appeal due to its game-play style. We localised the game completely into Japanese, including voice-overs to give it the best shot we can. Hopefully the Japanese players will be as excited about this game as the players have been in Europe, North America, and Australia,” says Manager Project Development & Game Evaluation at Nintendo of Europe, Tim Symons.

Discussions between Amadeus the wizard, Zoya the thief, and Pontius the knight sound amazing in Japanese. Before our heroes got to talk in this language, a lot had to happen. It was Nintendo that reached out to Frozenbyte in 2012, before Trine 2 was even launched.

“I was blown away by the beauty and design of the first Trine, so I simply contacted Frozenbyte asking if I could meet them and maybe see a sneak-peek of the sequel. When I visited and saw the game, I knew right away that it had the potential to resonate well with the Nintendo audience,” says Symons.

Those days, Nintendo’s Wii U console was not yet out. Frozenbyte was excited about the prospect of bringing its game to a completely new console, and soon brought Trine 2: The Directors Cut to Wii U. It was a great match with Wii U due to the GamePad Touch Screen: controlling Amadeus’s spells in the game by touch feels so natural it is hard to believe that the game was not originally designed with the GamePad in mind. Soon after, Nintendo and Frozenbyte started talking about localising the game for the Japanese market.

“We had great exposure during the Wii U launch with Trine 2: The Director’s Cut, and that has helped us tremendously. There have been some good years on other platforms as well, and the combined success has allowed us to grow as a company and hire more people,” Tuovinen tells. Frozenbyte currently employs around 65 people.

Meanwhile, the Helsinki Business Hub invited Nintendo to visit Slush to get a still better understanding of the Finnish gaming scene. The Slush event organised annually in Helsinki, the capital city of Finland, is the focal point for European and Asian startups and tech-talent to meet with international investors, executives, and media. Tim Symons has been attending Slush the last few years, and is impressed by the innovation that comes out of the northern country.

“To my surprise, the gaming scene makes for a significant part of the startup trend in Finland – with a lot of investor interest. The surge in mobile and tech start-ups is rather inspiring. Naturally Rovio and Supercell have helped to put a big spotlight on Finland, but I can genuinely say that there are lots of startups in Finland with similar potential, at least from a creative point of view. There are always new companies and new people to meet at Slush. As long as Nintendo is welcome, we will be coming back to look for opportunities to collaborate,” Symons says.

Chances are that Nintendo and other major players are more than welcome in Slush and Finland in the future as well. As Tuovinen puts it, the Finnish gaming scene is lively: “There are lots of startups and old-timers involved in the industry, the government has noticed the field, and education is catching up.” From 2016 on, Finnish schoolchildren will learn the basics of coding at school, for example.