Megawatt: Meet logistics of the future

Russian developers of autonomous transport systems EV-Tech and Megawatt have registered a joint company Megawatt Technology Oy in Finland. Right now, the company is working on an integration of unmanned systems into the supply chains of Finnish enterprises. In the near future, the company will employ about 30 people.

Registration of Megawatt Technology Oy in Finland was a logical follow-up to the plans of Russian developers of autonomous transport systems EV-Tech and Visilect to enter the European market. Acquaintance with the Finnish business environment began with a meeting with representatives of Business Finland, Helsinki Business Hub and Cursor, who helped to understand the nuances of European laws and prepare the launch of the project.

The company was registered in early 2020 in the City of Kotka on the southeast coast of Finland. But soon, the founders realized that in terms of networking and a deeper immersion in the business environment, the headquarters must be moved to Helsinki.

“We like Kotka, also because of its proximity to Russia and the measured pace of life but in Helsinki there is better and more organized networking,” says Anton Poppel, CEO of Megawatt Technology Oy. ”And this is important, at least because our partners and potential customers have their offices in the capital region of Finland”. 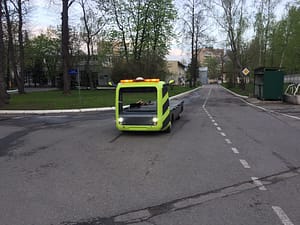 The all-electrical vehicle is able to carry 2 tons of goods to up to 200 kilometers on a single charge. Photo: Megawatt Finland Oy

The history of the company began 5 years ago in Skolkovo. The developers wondered how to create “machines” that can travel around the city and carry packages on the principle “left in the morning, returned in the evening.” The category of small-tonnage trucks N1 with a carrying capacity of up to 3.5 tons was chosen as a niche.

“That is the most popular category of trucks, providing delivery on the “short haul” – whether it is the delivery of pizza or piano.” says Anton Poppel. “From the very beginning, our task was to ensure more than one-time, namely, the constant movement of such machines inside cities according to a schedule.”

In the very near future, drones will appear on the streets of the cities

The range of use of the “last mile” unmanned vehicles is not limited to deliveries in the B2C segment. Such machines, for example, can move goods inside the factory workshops or deliver them from railway platforms to warehouses.

“We already have a number of differently implemented solutions.” says Anton Poppel. “Among them, there also are solutions for a major Finnish retailer Kesko”.

Unmanned trucks will become commonplace in coming years. The technology exists and works.

“Right now, EU is working on integrating autonomous vehicles into the city transport system” says Anton Poppel. “The determining factor here is how quickly legislators and insurance companies will manage to establish a necessary framework, the so-called “insurance product”, that will allow to introduce the technology into the tasks of the city.

The fact that Megawatt settled in Finland is no mere coincidence: the country with thousands of lakes offered the company the fastest conditions for relocation.

“We considered Britain, Switzerland and Germany as possible options. And only to agree on the relocation of the team, we spent a year in each country. And with the Finns, everything worked out in just 3 months,” says Anton Poppel. “We feel very comfortable here, and Finns help a lot in the organizational part. Special thanks to Helsinki Business Hub, Business Finland and Cursor.

Helsinki Business Hub has been actively participating from the very beginning and provided organizational support for the launch of the Megawatt project in Finland.

“We are glad that Megawatt chose Finland as the European headquarters,” says Olivier Bonfis, Senior Advisor to the Helsinki Business Hub. “During the cooperation, we provided all the necessary information, including the information about the opportunities for the pilot projects, and helped to solve practical issues. We will continue to foster networking with key players and effective integration of Megawatt into our innovative ecosystem.”

Would you like to know what kind of smart mobility opportunities Greater Helsinki has to offer for your company?

We help foreign companies to find business opportunities in Greater Helsinki. All needed information and contacts to the Greater Helsinki ecosystems are just one phone call away.

For more information on our services for mobility companies visit hbh.fi/smart-mobility 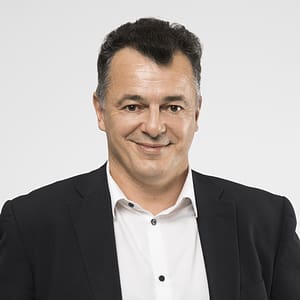