This page in: RUS

Russian businessman Alexey Titov, owner of a company that distributes spare parts for heavy agricultural machinery, is launching an ambitious project in Finland. He plans to establish a digital transcontinental logistics hub, so that farmers from Russia and CIS countries could easily order and quickly receive spare parts from any European, North American or Asian manufacturer, without dozens of local intermediaries. Helsinki Business Hub helped Alexey Titov take the first steps to start a business in Finland.

The traditional business of distribution of spare parts is undergoing great changes. It is obvious that in the future the success will come only to those market players that are now investing in high technologies, such as full-scale digital transformation of the business and intelligent logistics. The most forward-looking companies also invest in 3D printing of spare parts. 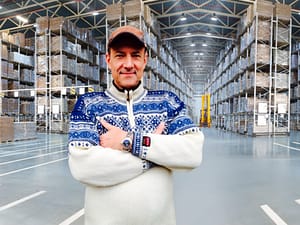 “We don’t have much time: three to five years, no more. After that, 20% of companies, those now actively engaging in the digital transformation, will become market leaders”, says Alexey Titov, general director of Magnum, LLC, Russian distributor of spare parts for heavy agricultural machinery. “We want to be at the forefront of these processes. So we decided to transform completely our traditional business. We will create in Finland not only a single spare parts warehouse, but also a a kind of think tank to rush into Industry 4.0”.

Finland is an excellent platform for developing and implementing innovations

According to Alexey Titov, Finland is an excellent platform for developing and implementing innovations. There are several reasons for this.

The first is a suitable environment for developing high technologies. It allows to engage in business not only experts in various fields of applied sciences, as well as, world-class local universities.

The second is advanced infrastructure and well-established logistic services.

The third is a small number of bureaucratic obstacles together with one of the highest credit ratings in the world.

Finland has revealed to be the best choice.

“Before having chosen Finland, we considered many countries, among which Germany, the Netherlands, Slovakia, Lithuania and Ireland. Initially, Finland was low on the list”, says Alexey Titov. “But after careful study of all the pros and cons, Finland has revealed to be the best choice.”

Another definitive advantage of the country of thousand lakes is the wide use of English, in which Finns are very fluent. Also noteworthy is a good geographical location, which is important in building logistics chains between Europe, North America, and Asia, on the one hand, and Russia, CIS countries and Baltic countries, on the other.

Megano Oy: from words to action

Magnum took the first concrete and big step towards establishing its business in Finland after the meeting between Alexey Titov and Karen Grigoryan, the representative of Business Finland in Russia.

“We met Karen in Moscow at one of the events of Business Finland. He put us in touch with Maria Hartikainen from Helsinki Business Hub”, says Alexey Titov. “To be fair, we were surprised that HBH provided us with free advisory services that usually cost pretty much in Russia.

Helsinki Business Hub arranged a fact-finding trip to Finland, in order to explore the business ecosystem of Greater Helsinki. What is more, HBH:

“We chose Vantaa for a number of reasons. The main ones are perfect accessibility and proximity to the airport and the sea terminal, as well as, to major terminals of the global logistics operators and of course an acceptable price level for the capital region”, says Alexey Titov. “The most important thing for us is that the site has all the necessary capacities to deploy a modern innovative hub.”

Registered under the name Megano Oy, the company plans to create jobs for three to five persons in the next year. At the first stage, Megano will focus on building an E-Commerce platform and launching a logistics hub.

In the future, a promising direction will be the development and launch of their own production of spare parts for agricultural machinery using revolutionary 3D printing technologies. This business unit is planned to be launched on the facilities of one of the technological universities in Finland. The most comprehensive study of the Finnish Fintech landscape is out