Makers of the future 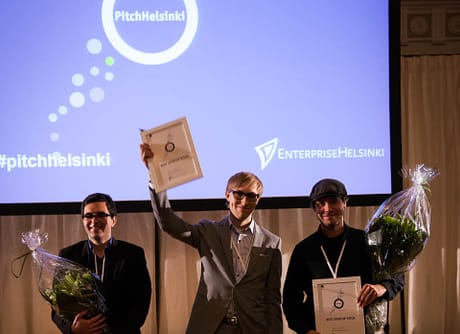 Oscar Tuutti, CEO at Uniqul, receiving the mention of “best start-up pitch” in the framework provided by PicthHelsinki 2013.

PitchHelsinki: narrowing the gap between start-ups and investors

“Be very clear about what you are trying to achieve, and surround yourself with people who are really good. No one person is ever right.” That is Alan Moore’s advice for entrepreneurs struggling to attract funding. The British educator and author of the book “No Straight Lines: making sense of our non-linear world”, a journey through a new way for social, economic and organisational innovation, was guest speaker at the eighth edition of PitchHelsinki. This annual event gives prominent start-ups the opportunity to publicly present their ideas and connect with potential investors.

Held on 20 November at the Helsinki city hall, the evening saw a total of 26 companies gather with a common goal: network and exhibit their forces. After the initial contact, the core part of the programme then arrived when 13 pitchers took over the stage, and in short turns of five and three minutes tried to convince the audience their take-off companies would be worth hundreds of millions just a few years down the road.

The latest edition of PitchHelsinki has introduced a novelty. Six of the participating start-ups have opened one-day rounds on Invesdor, an equity-based crowdfunding online platform through which companies get more funds in exchange for shares. People interested in investing can do so with as little as 20 euros.

“In Finland, the financial community has typically understood better mobile data, Internet and technology-oriented business proposals,” explains Lasse Mäkelä, one of the ceremony hosts and CEO of Invesdor. “In that sense, crowdfunding has provided many companies from different fields with a new financing alternative. One company that constitutes a good example of this is “gTIE”, a Finnish fashion brand specialised in neckwear, created by Jenni Ahtiainen. Their own customers believed in the profitability of the idea, so they wanted to invest in it. Some of the partners of Invesdor also joined the adventure and, in the end, they raised around 300,000 euros through our platform. I consider the company could have faced some problems getting funding in a more traditional way – for example, through business angels and capital networks.”

Innovation is in the air

What are the most promising areas to start a business nowadays? “Honestly, all of them,” Moore states. “We are seeing people completely reimagining, for instance, what a manufacturing company could look like thanks to 3D printing technology. On the other hand, access to education is fundamentally changing. Part of the discussion is based on how we can educate kids in poverty. The non-profit Worldreader is distributing e-books to children in Africa, so that they can gain access to tens of thousands of books at a price point which is a fraction of what normally would cost to buy a book and ship it. Then, on the other scale of that is MIT giving away entire curricula online for free under creative commons license. Healthcare is also facing huge challenges. In the West we have an aging population, but services are failing to adjust to this huge demand. Retail is also evolving. To the point that big supermarkets (like Tesco in the UK) with their massive warehouses, are actually looking five to ten years ahead and they understand that, with people doing so much shopping online, no one is going to come to those places anymore. So, I see innovation and transformation happening in every single industry.”

“I think that if I was an investor the first thing I’d ask to myself would be: what is the real need this company is trying to solve?” Moore adds. “It’s about doing much better, but with a lot less money and a lot less resources employed in the process.”

To illustrate the previous point we can have a look at the long list of participants at PitchHelsinki, among which a wide and varied range of business proposals can be found. From technology companies such as Tespack, with their high efficiency solar system backpacks that provide wireless energy, to Audrey: according to their slogan, “the world’s first real identity online dating service”.

However, the two initiatives named “best start-up pitch” by the jury were Playmysong and Uniqul. The first one is developing a mobile app that allows people to request songs and control the music at bars and parties, whereas the latter consists of a face recognition system which enables payments with one tap of a button – transactions are done in a second, down from the current average of nearly half a minute.

Furthermore, Playmysong turned out to be also the most attractive initiative from the investors’ point of view. The start-up received 24,900 euros out of the total 43,000 that were raised during the day of the event.

“Some people are entrepreneurs because they are really passionate about what they do, they want to change the world, but they are not traditional business people. And that’s absolutely fine,” Moore says before firmly concluding: “We need makers of the future, not consumers of the past.”

Finland ranked as number eight in the world for its ability to attract tale...
Scroll to top