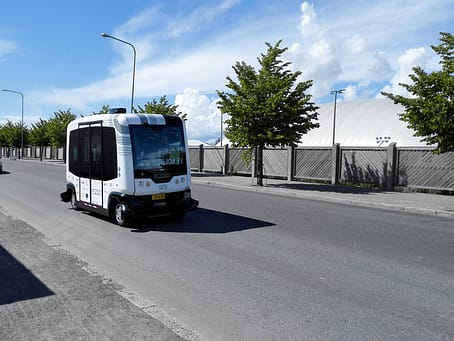 Small, electric robot busses are used in Helsinki to learn about the use of driverless vehicles in normal traffic conditions.

Self-driving cars and autonomous vehicles sound less like science fiction everyday and practical trials are starting to happen. Now you can find robot busses on the streets of Helsinki as Finland is gearing up to become a frontrunner in smart urban mobility.

Helsinki is one of the first cities in the world to pilot self-driving robot busses on public roads. In August two small, electric busses started to operate on a designated area in the city in an effort to learn how driverless vehicles can integrate safely into normal traffic systems. But the project also has a more ambitious goal: to turn these busses into an innovation platform where companies can trial their products and services for smart mobility in real-world conditions.

“There is a strong international drive to get driverless or remotely operated busses on the roads,” says Harri Santamala, Project Manager of Sohjoa, the team behind the platform. “The technology for operating automated vehicles in traffic is not quite there yet, but we have lot of technology and IT expertise in Finland which could assist in enabling this. What we offer is a test and innovation platform for these companies to use.”

The aim of Sohjoa, which will run until 2018 and cover also the cities of Espoo and Tampere, is to help companies create new export businesses and secure Finland’s position amongst the leaders in technology for automated road traffic. To achieve this, the robot busses will be opened for commercial pilots during the autumn and combined with a virtual environment. All facilities will be free for companies to use.

“The innovation platform will cover both the physical busses and the virtual environment. Because it has the IT environment as well, it enables many different kinds of pilots,” Santamala explains.

Sohjoa has raised plenty of interest and several companies in the greater Helsinki region are discussing pilot projects this year. The first one has already begun with Finnish startup Vionice using the robot busses to test its computer vision system for automatic recognition of road infrastructure.

“The response has been very positive. Even I have been surprised how many companies [in Helsinki] work with smart mobility,” Santamala says. “The platform enables experimental, rapid development in an urban environment.”

These experiments are made possible by Finland’s legal environment, which has some of the world’s most progressive laws for testing autonomous vehicles. Currently the robot busses operate on specific routes with low speeds and have a human driver aboard at all times to ensure a smooth ride, but there is no legal requirement for this. In fact, Santamala believes the first driverless bus routes could operate in Finland in just a few years time.

The Sohjoa project is led by the Metropolia University of Applied Sciences in cooperation with several partners ranging from universities to cities and the Ministry of Transportation and Communications. One of the earliest partners for the project has been Helsinki Business Hub (HBH), which Santamala says has had a key role in bringing the various players together.

“The involvement of HBH has opened up completely new contacts and we have been able to reach organisations which otherwise would have been unavailable to us,” he stresses.

While Sohjoa currently offers an unique platform for Finnish companies to trial their products and technologies, its doors will also soon open for international partners. Santamala would like to see the platform used to solve urban mobility challenges around the world:

“Our platform is great for igniting development projects and getting companies involved, but eventually we will need more focused projects and long term traffic trials and we want international partners to achieve that,” Santamala explains. “We expect to announce new things next year.”

For driverless vehicles the road ahead is long, but the wheels are already turning in Helsinki.

Never miss out on the latest smart mobility news. Subscribe to our newsletter.