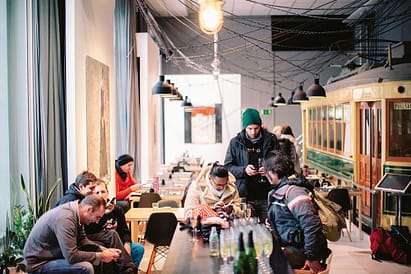 Yet visit the Finnish capital of Helsinki, and there is a free hotspot almost everywhere you need one. It’s fast enough to allow video calling and HD streaming. And it doesn’t require a reading of lengthy terms and conditions, nor a password, nor the need to divulge your age, gender, or email address. Helsinki doesn’t want your identity, or your money, or your data—indeed the only warning before you hit “accept” is a reminder that public networks are insecure, so be careful out there. All it wants is to get you online. Fast.

Helsinki’s excellent internet infrastructure is the result of some forward thinking on the part of the city, says Micah Gland of Helsinki Business Hub, an organization that promotes the city. When Helsinki’s city government was installing Wi-Fi in its offices and other facilities, it decided to concurrently install open networks for public use. According to Petri Otranen, who runs IT for the city administration, it was built in 2006 before the capital hosted a meeting of Asian and European heads of state.

The result is not necessarily blanket coverage, but wherever there is a building or space controlled by the city, there is Wi-Fi coverage. And it isn’t particularly expensive. Otranen says the cost is included in overall maintenance of the city’s internet and is not broken out separately, though Simo Volanen of Helsinki’s IT department estimates that the outside base stations cost some €40,000 to buy and install ($45,000) and have an annual maintenance cost of about €4,000. This does not include the cost of running the network, which Helsinki does for its own purposes in any case.

The reason Helsinki is able to do this, and London or New York are not, is partly down to the way Finland is run. Finnish cities have tremendous power, including powers of taxation. Helsinki residents pay a municipal tax of 18.5% of their income in addition to national income tax. Finnish cities have the usual powers—streets, rubbish collection—but also handle things like healthcare, education, and cultural institutions. That means that their municipal footprints are much bigger than London’s, for example, where city authorities have fewer day-to-day responsibilities.

But here’s the odd thing: Most Helsinkians have little need for free Wi-Fi. Finns receive the most generous data allowance from mobile operators for every euro they spend, according to Politico. For €35 (about $40) a month, a Finnish phone subscriber will get 50 gigabytes of high-speed data, 25% higher than Estonia in second place, and more than 10 times as much as the EU median. Gland of Helsinki Business Hub tells me he is on an unlimited 4G data-voice-text package that costs only €30 per month.

Perhaps the biggest beneficiaries of the service are tourists and other visitors, who forgo expensive roaming fees while in Helsinki. This generates goodwill for the city, says Otranen, Helsinki’s IT manager. (City employees also have no excuse for missing emails or calendar appointments while on the go.) Helsinki’s surprisingly affordable rollout of free public Wi-Fi “makes everyone’s lives easier every day,” he says.