Helsinki has been ranked third behind New York and London in a global study of governmental support of entrepreneurs among cities.

The inaugural CITIE Index surveyed 40 cities worldwide, stating that “Helsinki’s third place finish shows that smaller-scale cities are just as capable of developing the policy and ecosystems to support innovation and a thriving entrepreneurial tech scene.”

Finland’s capital had the most consistent profile of any city in the top five, showing particular strength in the Infrastructure roles of Host, Investor and Connector, where it was ranked number one.

“By adopting a highly collaborative approach to working with local entrepreneurs, Helsinki is developing high-quality digital solutions for citizens through, for example, the Helsinki Loves Developers and CitySDK platforms,” the report read.

The city’s strategy of “mobility on demand” with a fully integrated public and private transport system to be introduced by 2025 was also applauded. The service “carries the scale of ambition you would more typically expect from a tech start-up and is defining mobility as a service agenda globally.”

CITIE (City Initiatives for Technology, Innovation and Entrepreneurship) represents a partnership between Nesta, Accenture and the Future Cities Catapult under CITIE.Index.

The aim of the report is to support city leaders in order to develop policy that catalyses on innovation and entrepreneurship. 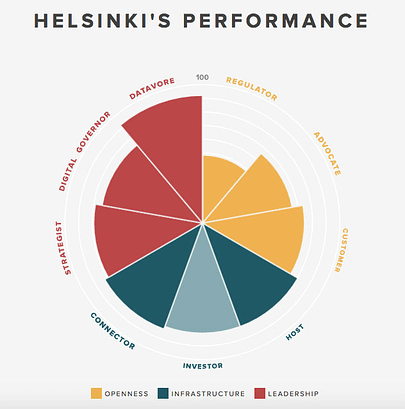