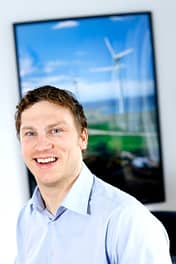 Nils Borstelmann decided to rebel against his fellow students who all opted for France or Spain for their exchange year, and go to an unknown city in the north –  Helsinki. Being the rebel paid dividends and Nils is now happily married to a Finnish woman and works for a German company in Helsinki.

The international atmosphere in Helsinki surprised Nils, a German native,when he arrived in the country seven years ago. Everyday life was easy even though he didn’t speak any Finnish. ”Where ever I go, I never have problems getting by with my English”, he says.

Nils works for Enercon, a company, which produces wind energy turbines, ranking in the top 5 in the world. Enercon opened its Finnish sales office in September 2012 and Nils was asked to run the office.

The wind energy business is expected to grow remarkably in the near future. The recent changes in Finnish legislation give more support renewable energies and encourage the predicted growth. At the moment, Enercon Helsinki is a two-men office, but the plan is to hire more people in the future. “There is definitely knowhow here”, Nils says and adds that they are looking to hire especially technical staff for the service and maintenance work.

Living close to nature and water have always been important to Nils. When he came to Helsinki he found both. “Helsinki is surrounded by water and there are beaches, forests and islands near the city”, he describes. Nils also finds Helsinki an energetic city with a pleasant social and cultural life, and has come to appreciate the fact that everything in the city is within a walking distance.

In the summer, Nils likes to spend his free time with friends in  summerhouses or sailing. In the winter, he loves to go to sauna or host a nice glögi (mulled wine) party. “Helsinki is a very lovely place to live”, he claims convincingly. That’s why Nils doesn’t just tell his family and friends about Helsinki. “I keep telling them to come find out for yourself!”