Underwear that analyzes your body position and walking technique. Technology that evaluates an athlete’s condition and makes optimal adjustments to his or her training program. Heart beat analysis technology that can be found in the products of giants like Samsung and Microsoft. Sounds almost like science fiction, but it’s all true. It’s Finnish health technology.

It has happened so fast that many of us don’t even grasp it yet: health technology is now the fastest growing Finnish export sector.

– There are about ten countries in the world that export more health technology than they import, and Finland is one of them. There are 400 companies operating in the Finnish health tech sector, with a total turnover of about 3 billion euros, says Pekka Sivonen, a co-founder of HealthSPA collaboration cluster that helps Finnish health tech startups.

– We first saw the health technology trend among engineering and business students a couple of years ago. That’s why we decided to launch the HealthSPA cluster. We want to enable better cooperation and help startups get funding and visibility. Finland has profound health tech know-how, since companies like Suunto, Polar and Nokia have a long history of developing the technology, says Christian Lindholm, another HealthSPA co-founder.

So HealthSPA offers its member companies a chance to stand out and gain international visibility and funding. On the other hand, it also offers events, collaboration possibilities, as well as information on market mechanisms and sustainable growth.

– We have about 200 members at the moment. Wearable health technology is a particularly fast growing field among them. It includes watches, jewelry and clothing that has built-in technology, says Lindholm, whose own company, Koru, also specializes in wearable software.

– Basically we want to build an ecosystem that includes small Finnish health technology startups and big international companies who are looking for health tech innovations and can offer distribution channels for startups. The Helsinki region is already hosting a vibrant ecosystem, in which companies join forces to innovate and work together, says Sivonen.

HealthSPA works actively to bring international investors to Finland and to its various technology events, Slush being the most important.

– International investors already know that Finnish health tech companies can offer excellent technology. They are looking for new investment options and we want to offer them just that. We are like a junior ice hockey league, now building top teams for the future, adds Sivonen.

A blue and white agenda

HealthSPA is also starting to catch the attention of other Finnish companies as well as the Finnish government and is now looking for outside funding and partners to boost its operation.

Lindholm and Sivonen also see great possibilities in the social welfare and health care reform that Finland will undertake in the coming years, as it may be an opportunity for health tech companies to introduce their products in the Finnish health care system. The reform could offer a test market, allowing fast product development and great business references for startups. On the other hand, cooperation with health tech startups could also result in a more efficient health care system.

– We do have a blue and white agenda. We want to help this sector grow fast, as it will also create new jobs in Finland, says Lindholm. 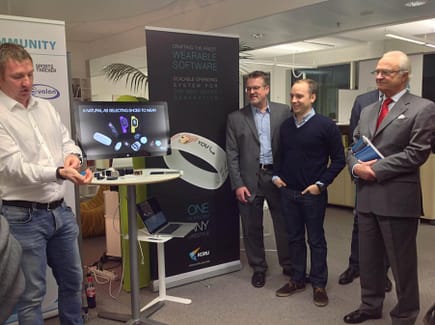 Bringing people and companies together

Right now HealthSPA operates in Otaniemi technology hub in Espoo and is also planning events in other Finnish cities. In 2015, the team intends to expand its efforts in order to serve both the individual startups and the whole ecosystem on a new level, and will announce details early next year.

In the spring, HealthSPA will also organize a large event in the Helsinki area together with its partners – a cross-disciplinary health tech, wellness and wearable technology event for companies and investors.

– It‘s always important to bring together people from different organizations and backgrounds in the spirit of open innovation. Events are an important forum for startups in the capital region, particularly for those looking for like-minded people to share and learn with, says Lindholm, who also curates many events.

Finland, get your game face on!