Dmitry from Runa Capital talks of the power of friendship, global champions and why you shouldn’t waste your time on Game of Thrones.

Before jumping into investment world Dmitry had a long corporate career and he worked years as an entrepreneur. Upon graduation from the American university in Moscow, he started to do business development in an international company operating video game machines. He was working in CIS, Baltic countries, and Romania. That’s where he got his first taste in greenfield investing. In 2001, Dmitry travelled to Romania with a business card of a lawyer, who was supposed to be this only point of contact in the country. Little did he know that meeting would grow up in a business with $20 million in revenue per year.

“I also worked with more exotic markets like Bolivia & Peru. 6 months in South America exposed me to greenfield project and realised that nothing is impossible if you have the right mindset. Travelling opens up the whole new perspective to the world. I like to travel to places with rich history, from South America to Jerusalem, from Florence to London. I wonder why so many people watch Game of Thrones –the actual history is so much more exciting, so why not taking what’s real?” 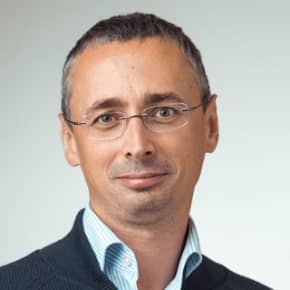 Moving into the startup world felt real. Having enough of corporate life Dmitry started a company to manufacture vending machines.

“Selling snacks and coffee was not that techy business but extremely valuable experience – I managed to scale the business from zero to $25 million in revenue within 3 years.” However, as the company grew big it was no longer fun to run it. The lion share of the work was focused on running the operations. Dmitry started to search for the next big project and it appeared through his classmate and old friend Serguei Beloussov.

Serguei and Dmitry studied applied physics at Moscow Institute of Physics and Technology but after graduation their paths split. While Dmitry went through his corporate career working in operations and HR, Serguei was an entrepreneur at heart and founded his first company while still doing his Masters. He’s a founder of global software firms Parallels and Acronis.

“Serguei came with an offer to start a VC. My first question was “What does that even mean?” to which Sergei responded: “Book your flights to the US, I will explain on the way.”

After spending awhile in the States the plan for a newborn VC was ready: 1) find the bright minds & companies; 2) help them with money and knowledge; 3) make sure they can grow their business and go global.

At first, the VC was focusing on Russian speaking people, but very soon the partners realised that there was no point to limit themselves to only one language or country criteria.

“Our goal was to find with global champions. Those may come from different places, in fact, any country in the world may host them. This idea helped us to scatter our firm from Russia to Europe and eventually to the US.”

The friends realised that software has had the highest potential & started investing in it. In 2010 market the biggest trends were cloud computing, proliferation of mobile devices & growth social interactions online. Those 3 trends offered infinite possibilities for automating traditional industries – education, healthcare, retail and more. Plus they enabled growth of other businesses within those industries.

“Because we were physicists by background we were tempting towards complex technologies. We had the knowledge and we believe that there will be significant changes beneath the application level.”

The perfect example of complex technology for Runa in 2011 was Nginx. One of the US VCs passed then-small Russian speaking team saying that it was too early stage for them and asking if they’d be interested. At that point, there was no company and no business model, just software, which was getting popularity across the world – 6% market share at that time. The team has developed a web server, which was extremely efficient in handling high loads and 10 times faster compared to traditional web servers. Runa reached out to the founders, and it was a match.

“We liked what the company was doing. The technology itself was a piece of art, developed pretty much by one person. We were impressed. Plus, the product had WOW effect upon users. Many people were excited about it. There was a traction – the 6% number was growing every day.”

Nginx gave its clients massive competitive edge in the era of high-speed Internet and it was a highly-sought deal eventually. Runa had to compete with other funds and ended up with having syndicate deal with e.Ventures and Michael Dell’s fund. In 2011, the valuation was a single digit, but now it is close to $200 million.

“Nginx was a complex tech in the sense that it was not an app and it was not visible to consumers. However it handled nearly 99% of pages shown to consumers – that’s a really impressive fact. Nginx powers 77% of the web, including top websites like Facebook that have a problem of high load.”

Runa Capital has invested in nearly 40 startups across 11 countries. The team was able to reach $135 million in the first fund, and then another $135 million in the second fund. By 2014, Runa had 5 partners, with 2 partners based in the US, and plans to expand the US team. By 2016, Runa has made 5 exists. The company covers 50/50 North America & Europe (with its largest economies – Germany, France, UK, as well as Eastern Europe and the Nordics.)

Partners of Runa Capital will be at Arctic15.

“Number of startups per capita in is quite high in Finland. I am impressed that such a small country can produce so good startups. I personally love Finland a lot. I was born in Karelia, and I have to say there’s nothing better than a cross-country skiing in the forest. I did 350 kilometres last winter.”

HBH viewpoint: Putting the pieces together in venture capital

The Future of Mobility: From peer-to-peer car rentals to integrated mobility...
Scroll to top