A starting point for Chrys’ investment career was Cisco. After a stint as an engineer in Silicon Valley, the Cypriot moved to London to do his MBA and switched to business development position in Cisco London office. There he focused on investments & acquisitions in the software sector covering the US, UK & India.

The career with Cisco ended as Chrys eventually fell in love with one startup and left the company to join them as a COO. The startup developed urban operating systems to collect data from sensors within building environment and allowing partners like Philips & GE to build apps on top of it. The CEO of that company was a great visionary who managed to build not only a great product but also a great team.

“The company is doing pretty well and works on large city & infrastructure projects at the moment. I am still a shareholder, good friend, and advisor there.”

Since then Chrys has been mentoring startups, primarily at seed, early and Series A stage. He was helping with fundraising rounds, testing new business models and looking at their growth & expansion strategies. He joined Amazon web services in 2012 as a cloud evangelist. There he led business development with the startup ecosystem across Europe, Middle East, and Africa.

“I was talking to pretty much every hot startup in Europe, educating them about cloud computing and helping to get funded.”

Through there he got approached by a few venture funds, joined first Accel Partners, and started working with Notion VC 1.5 years ago. “I just kept falling in love more and more with young people trying to change the world. Big ideas are what motivates us in Notion.”

Founded in 2009 in London, Notion VC does a lot of early stage & angel investments, but also some B and C series. At the moment, it is on its third fund. Notion closed 36 deals over the course of the 3 funds, with 8 of them from the last fund. The main focus is on Europe – Spain, France, Portugal and the Nordics but also Hong Kong. 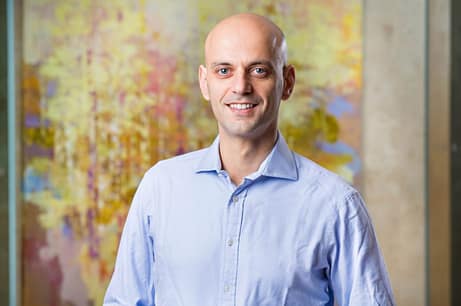 Chrys admits that he prefers early stage investments. At the early stage, it’s a lot about market and team, because the product is often not there yet, and there’s little or no traction.

“I believe in young entrepreneurs and in the madness that they believe in and backing them – it’s all about that. Meeting passionate entrepreneurs willing to disrupt just about any market really – I’m not set on the market itself. I am not limiting myself to only fintech or HR or anything to that extent.”

However, Chrys has his favorite fields, which are HR, infrastructure, and security. “I love the HR investing, love the people driven aspect of things. Essentially if you are selling to the enterprise there’s always a consumer angle to it – the employees of the end user is a consumer you end up doing B2B2C or B2C2B model.”

“I’m an engineer by nature I like problem-solving in things that are not efficient, plus I know how to find a way to modernise it.”

More than in markets, partners in Notion believe in certain key trends whether it’s a mobile penetration into the enterprise or the API economies. They have done a lot of investment in API, and almost every single company in the portfolio is a data driven company. Data & API has been a default theme to invest in over the last year.

What determines Notion is that it’s a neat team of proactive, empathetic and supportive people willing to work with outstanding teams of outstanding projects. There’s always a board member dedicated to a particular company, but one can always rely on other team members help and expertise.

People in Notion VC are not after the numbers in the financial plan. They value 3 components – 1) a great team, (“and not only one founder. I believe in collaboration and ability to balance each other,” says Chrys) 2) trying to solve big problems in the massive market and 3) the market has to move in the right direction. “If there’s a traction and great product at place – that’s even better.”

“We are approachable. I meet startups at conferences, but I’m also open to people around me. I randomly meet some startup founders that were sitting next to me at the coffee shops. They see the logo on my laptop and start talking to me. I haven’t invested in them in the end, but I helped with contacts and gave an advice. At the moment, I’m trying to balance out my mentorship as I’m beyond busy with my portfolio companies but I still do mentor some startups. As much as I can contribute to the ecosystem I try. However, if you are looking for an investor, the best way to get the right person would through a warm introduction.”

That openness Chrys got from his travels. He is a professional nomad. Because of his career, he’s been living in 8 countries. With 30 trips a year on average, he’s still very much into traveling. “I like to meet with my brothers, go somewhere random. We don’t book hotels we just show up with our backpacks in random places and see what happens our way.”

Chrys has been investing a lot through Cisco, Amazon & Accel, and has done 11 angel investments over the last few years.

“What drives me and makes me happy is adding value to other people’s life without asking in return. My boss in Amazon told me: give & don’t expect anything. I don’t have massive expectations of becoming a billionaire or drive an expensive car. Life is much easier – give me a good food and opportunity to travel & see the world, and I’m happy.”

HBH viewpoint: Partnering with the Chinese pays off