Something for everyone – GHP’s Summer Fest 2013 was filled with interesting presentations, discussions and lively networking 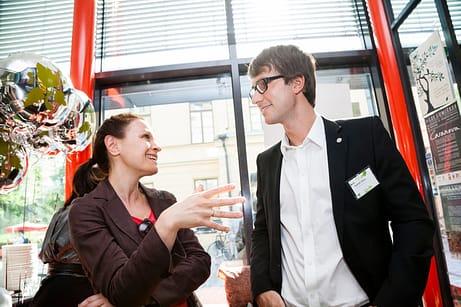 GHP’s annual event for partners, clients and other important stakeholders was organized on June 6th in Helsinki at café Fanny. This year’s event saw a record number of guests who came to hear some of the highlights from Greater Helsinki’s invest in -field.

The Founder and Managing Director of Oxford Intelligence, Peter Lemagnen, had positive news to share: despite many figures showing a decline in investment flows to Finland, the number of greenfield FDI projects landing in Finland and Helsinki is up from the previous year. In fact, in 2012, from all Nordic locations Helsinki managed to attract most FDI projects!

The active startup scene is one of the reasons Helsinki is an attractive investment location. Mr. Will Cardwell from Aalto University emphasized the importance of growth companies for Greater Helsinki’s economy as they create the majority of new jobs in the region. Startups and other small companies are also a valuable source of innovation that companies, foreign or domestic, need for gaining competitive advantage. Finland’s startup-friendliness certainly pays off.

Huawei Finland R&D center’s site manager Mikko Terho unfolded the winning arguments on why Helsinki was the place for Huawei Technologies to make an investment worth 70 million euros. ‘”It all comes down to talent”, he says. Finland has talented experts available, an abundant engineer resource, world’s second highest R&D competency and an open research environment. Huawei Finland is recruiting 90 per cent of its experts locally and is committed to hiring 100 more people within the next five years.

An innovative R&D environment can also lead to discovering entirely new markets. One such example is neurogaming – a fascinating emerging field with yet unmapped potential. GHP’s business advisor Indrek Vainu paints a picture of the future opportunities neurogaming may create: ”Finland has a profitable, booming game industry and world-class neuroscience research that support our possibility of becoming the European pioneer in games played with your mind.”

Have a look at some of the captured moments from GHP Summer Fest in the picture gallery below.