Team Finland had a strong presence at the International Real Estate Investment Forum PROEstate organised in Moscow on September 9-11, 2013. Finland was the guest of honour at the event and was represented by Invest in Finland, City of Helsinki and City of Vantaa with Airport City Project Aviapolis, as well as the companies Lemminkäinen and NCC.

International Real Estate Investment Forum PROEstate was held in Moscow for the first time this year. The forum was a multi-format and multi disciplinary event focusing on urban development and the real estate market. During three days, over 4000 participants and visitors attended the event. The conference programme featured more than 35 different events.

Russian investments in Finland have doubled

Direct investments from Russia to Finland have more than doubled during the past ten years. Russian companies appreciate the competitive advantage provided by Finland’s geographical location and its competitive real estate markets. Finland is also a gateway to Russian companies aiming for Russian or EU markets.
More than one hundred guests attended a reception at the Finnish Embassy held during PROEstate. Finland’s Ambassador to Russia Mr. Hannu Himanen spoke about the mutual interest of doing business between Finland and Russia.

More than one hundred guests attended a reception at the Finnish Embassy held during PROEstate. Finland’s Ambassador to Russia Mr. Hannu Himanen spoke about the mutual interest of doing business between Finland and Russia.

“Every FDI decision is motivated by solid facts and long-term opportunities. In the case of Finland, the ease of doing business, close geographical location, good funding opportunities and the knowledge-based economy are great assets for Russian companies,” says Tuomo Airaksinen, Head of Invest in Finland.

Most companies choose Finland not only because of its modern logistics but because of the opportunity to add value to their products. Finland ranks highly in international innovativeness rankings, and has a skilled, Russian- and English-speaking workforce. Companies are opening up new sites in Finland because of the well-functioning infrastructure and the stability of the transit trade from the EU to Russia, which already passes through Finland as the countries share the same rail gauge. The distance from Helsinki to St. Petersburg is only 400 kilometres, three hours by train.

Finland is a safe location for real estate investments

“Real estate is a global sector where a strong message is the only way of succeeding. With a common message we can make new players interested in our individual projects. Joint ventures show the players’ ability to collaborate. Participation is important in that it results in contacts and information,” says Deputy Mayor of Helsinki Hannu Penttilä.

Finland is the EU country where real estate investments have proven to be the most lucrative in recent years. Finland’s strengths are its safe and functional society as well as its accessibility to Europe and beyond through the award-winning Helsinki Airport. Aviapolis, an Airport City Project in Vantaa, is a fast-growing business location which thrives on accessibility and connectivity. Vantaa is also a very popular tourism destination thanks to the diverse services provided in the area.

“Airport Cities are a growing global phenomenon and Aviapolis in Finland is well on the way to becoming Northern Europe’s most attractive business location,” says Aviapolis Project Manager Mari Peltomäki. 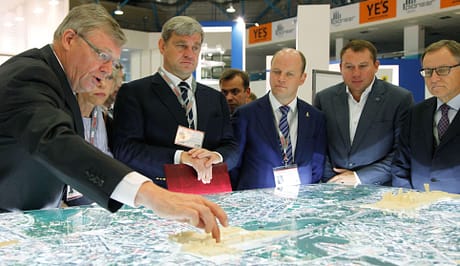