Finland enjoys a long history of winter sports success, particularly in ice hockey. Now the Finnish expertise is helping the Chinese Ice Hockey Association prepare for the 2022 Winter Olympics. Helsinki Business Hub used its know-how and contacts to bring the two countries together.

The Chinese government has ambitious goals for the 2022 Beijing Winter Olympics. In addition to high targets for its athletes’ success, the country wants to create 300 million new winter sports enthusiasts in time for the Olympics and build the infrastructure to support this. One of the key sports in achieving these goals is ice hockey.

China already has a significant number of young ice hockey players, over 3,000 in Beijing alone, but the Chinese Ice Hockey Association (CIHA) is only getting started. It wants to further grow player numbers, develop a youth training system and establish modern training facilities.

“There is no doubt the upcoming 2022 Winter Olympics is a good opportunity for Chinese hockey, but it is also a challenge. Hosting the Olympics will help build more stadiums and encourage more people to play hockey,” explains Lucy Wang, Deputy Secretary General at the CIHA. “However, the level of Chinese teams is still far behind other countries, and it is a huge challenge to catch up within three years.” 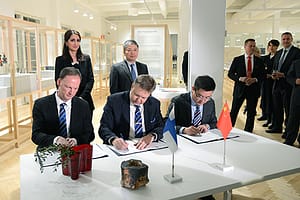 This is where Finnish ice hockey know-how steps in. In February 2018, the CIHA and the Finnish Ice Hockey Association (FIHA) signed a Memorandum of Understanding to advance ice hockey coaching and training in China. The Chinese are also interested in Finland’s expertise in building sustainable ice hockey and multi-purpose arenas.

“Finland’s national men’s and women’s teams are first-class,” Wang says. “We know the International Ice Hockey Federation conducts talent training in Finland every year, including cultivating ice hockey players and coaches. Finland has a lot of relevant experience, and we really appreciate all aspects of their help.”

The ice hockey memorandum is part of broader winter sports collaboration between China and Finland. In 2017, the presidents of the two countries met in Helsinki and designated 2019 as the “China Finland Year of Winter Sports”. The year covers over 60 different events in both countries. Helsinki Business Hub (HBH) has participated in and helped to organise the winter sports year events.

Finland is one of the first countries with which China has agreed this type of partnership, and the country is already working with Finnish coaches in many Winter Olympic sports. Most notably, Mika Kojonkoski, the former coach of Finnish, Norwegian and Austrian national ski jumping teams, has joined Team China to build and train a Chinese ski jumping team for the 2022 Olympics. The team currently lives and trains in Finland.

In addition to its participation in the China Finland Year of Winter Sports, HBH has played an important role in making the ice hockey memorandum happen. HBH helped the CIHA to connect with its Finnish counterparts and hosted the ice hockey association and Beijing Sports University during their visits to Helsinki. Later HBH helped the CIHA find suitable Finnish coaches for its teams.

“HBH has been a great support to the China Ice Hockey College,” Wang says. “One of the coaches HBH found [Aki Mykkänen] has even become the head coach of the men’s U18 team for the World Championships.” 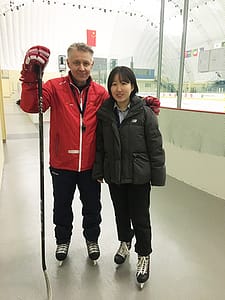 Mykkänen is one of the first Finns making a mark in Chinese winter sports. He was hired in May 2018 to provide his 20 years of coaching experience to 14-to-17-year-olds at the CIHA operated China Ice Hockey College. Mykkänen is happy with the progress.

“There are a lot of differences but I was actually surprised how good the facilities are here,” he says. “Good players are cultivated as long as someone teaches them the right things. I have brought a bit more organisation to [the college’s] coaching and training approach…The best players in China are very good but it is hard to find whole teams of great players. That will take time and effort.”

In China, sports often get left behind around 12 years old when school days become longer. The Ice Hockey College is now experimenting with a new system combining education and training. This means talented ice hockey players at the college are offered daily school lessons which fit in with their training schedule.

This programme is part of the CIHA’s efforts to develop a new youth training system. It is off to a good start, but the biggest challenge Mykkänen sees is the lack of national and regional leagues for the 14-to-17-year olds.

“Their playing experience is completely dependant on tournaments and practice games. But this alone can’t create good players,” Mykkänen says. “Regular games are crucial to have something to aim for and learn from. Luckily this is well understood in China and we are working to fix it.”

In the meantime, one solution is spending time abroad. Two youth teams from the China Ice Hockey College are already in Vuokatti, Finland, to learn new training methods and gain experience by playing against Finnish teams.

It is this kind of a collaboration Irma Ylikangas, Senior Business Advisor at HBH, would like to see expand in future. HBH has already started discussions with the CIHA to help them find more coaches, training facilities and new partners, such as Finnish teams interested to work with Chinese teams and arrange practice games in both countries.

“Improving the skills of a single player is very important, but more so is for the entire team to have real games with different opponents,” Ylikangas says. “Ice hockey is a team sport and this is a must to succeed.”

Wang agrees. She says more and more Chinese have come to know, love and play ice hockey since Beijing’s successful bid for the Winter Olympics.

“With the efforts of China and Finland, the two countries can have more in-depth cooperation [moving forward]. And with the help of Finland, Chinese hockey will become better. The 2022 Olympics is just the beginning for us. We will continue to develop our passion for ice hockey,” Wang concludes.

Read more about our services for Chinese companies: hbh.fi/china