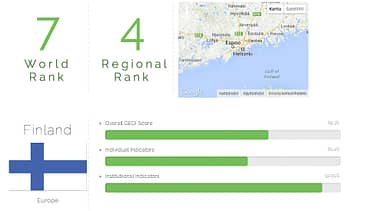 (Good News from Finland) Finland has been ranked as the 8th most entrepreneurial economy in the world, according to the 2014 Global Entrepreneurship and Development Index (GEDI). The GEDI index is based on analysis of comprehensive data sets from more than 120 countries that marshal information about entrepreneurial attitudes, aspirations, and activity.

The top country for the entrepreneurship is the USA followed by Australia, Sweden, Denmark, Switzerland, Taiwan, Finland, the Netherlands and the UK. Finland’s total score in the rankings was 69.3 whereas the top country the USA scored 82.5 points.

—  Entrepreneurship creates social benefits that extend beyond the individual, such as job creation, increasing competition and enhanced economic dynamism, says Professor Erkko Autio, co-author of the study from Imperial College Business School according to LSE.

According to the GEDI index report, Finland has improved its score most in terms of high growth, internationalisation, competition, risk capital, gender and human capital. The index assesses entrepreneurship based on 15 different pillars, including those mentioned here.

The study was carried out by researchers from Imperial College Business School in association with George Mason University, the London School of Economics and Political Science and the University of Pécs.