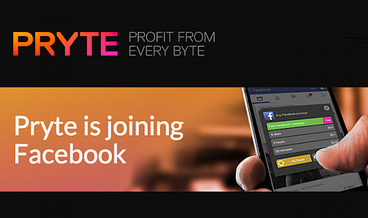 Facebook is acquiring Pryte, a Finnish company whose technology allows smartphone users to download applications using temporary mobile data allowances. Terms of the deal have not been disclosed.

The Helsinki-based company says it helps both users and mobile operators by allowing people to pay only for data they need for specific applications.

Facebook said the deal would help its efforts to connect people to the Web in under-developed parts of the world though its Internet.org initiative.

— The Pryte team will be an exciting addition to Facebook, the world’s biggest social networking site said in a statement.

— Their deep industry experience working with mobile operators aligns closely with the initiatives we pursue with Internet.org, to partner with operators to bring affordable Internet access to the next five billion people, in a profitable way.

Pryte said being part of Facebook tallied with its aim of establishing new ways for people to use the mobile Internet.

— Since we launched Pryte we have worked to reimagine the way mobile data works in an app-driven world, by enabling partnerships between app and content providers, and mobile operators, the company said.

— Now, we’re joining Facebook, whose mission to connect the world by partnering with operators to bring people online in a profitable way aligns closely with our team’s goals.

Improving your city starts in Helsinki