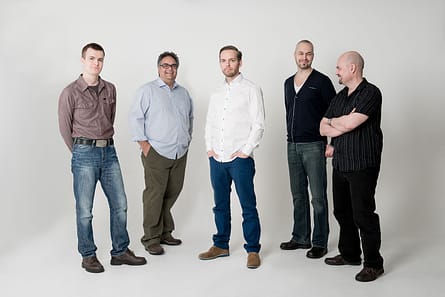 Finnish startup Asqella has raised €1.8 million in funding from international backers to introduce its new imaging technology to global markets.

Internal theft is one the major causes for loss in retail. But not for long, if you ask Finnish technology company Asqella.

Helsinki-based startup Asqella has high expectations for 2015. The company recently secured a 1.8 million euros financing round led by Finland’s VTT Ventures and angel investors and joined by China’s Shenzhen Lietou Fund (under Shenzhen Leaguer Venture Capital). And this is before the company even has a product on the market.

“We are developing a globally unique imaging technology,” says Asqella’s co-founder and CEO Arttu Luukanen. “For the past year we have been working on taking the technology from research prototypes to commercial products. Now the international launch of our camera starts to be very close…and the new funding round makes it possible.”

Asqella claims to be the first company in the world to offer ‘passive multi-band terahertz imaging systems for security screening applications’. That is the technical description, but in short the company has created a unique security camera technology for loss prevention and physical security applications.

This technology makes it possible to screen large numbers of people for concealed items swiftly and with minimal inconvenience. The camera works like an advanced thermal camera which makes it both a safe and non-intrusive method.

“Ours is a passive camera. We don’t radiate people with anything but instead detect photons that people naturally emit. Since there isn’t any radiation, our technology doesn’t cause any health risks either,” explains Luukanen. “Also the camera doesn’t reveal any intimate details of people. It only shows the silhouette of a person and any hidden objects as visible as contrast differences in the image.“

Major potential in urbanisation and retail

Although security screening is often associated with airports, Asqella is tapping into two megatrends: growth of online retailers and urbanisation.

In retail distribution centres Asqella’s technology can be used to replace traditional loss prevention and screening methods. Where security gates and manual checks are often labour intensive, slow and potentially unpleasant for the employees, Asqella’s cameras are not. For example they can be placed to point a door and screen people while they normally walk through the area.

No walking through security portals or queuing for body checks.

Similarly, the cameras can be used in cities in public buildings and big events to ensure no potentially dangerous items are brought to the area.

This approach has international appeal. Asqella, established in 2013 as a spin-off company from VTT Technical Research Centre of Finland, already has potential pilot customers ready in Finland and abroad.

In addition, its first funding round of roughly one million euros was joined by a Singaporean angel investor and the latest round incorporated a Chinese investment fund, Shenzhen Leaguer Venture Capital. No surprise then that the company, which also works with a wide network of subcontractors, is looking to expand its six member team and hire at least two new employees to speed up its market entry.

While Asqella is first eyeing the North American and European markets, its new investors offer a valuable stepping stone in addressing the Asian market, notably China.

“In the future China can be one of our biggest markets,” Luukanen says. “The pace of urbanisation in China remains unparalleled. Both of our target markets, loss prevention and physical security, are very important there.”

Asqella’s success in China came via contacts within its existing network of stakeholders. But despite the geographical distance, Luukanen doesn’t see any major differences in the funding processes in Asia and Europe.

“Of course it takes meetings, travelling to the country and meeting people in person, but we didn’t see that decision making would have been slower in China than Europe. The process was very straightforward and goes through the typical steps,” explains Luukanen. “These new investors have brought great expertise to our board which help especially with entering that market.”

Luukanen admits China is not an easy market for a small Finnish company to crack and, while Asqella itself doesn’t yet have operations in the country, he gives one key piece of advice: get a local business partner.

“We can’t open the market alone which is why we are planning to partner with suitable local operators. Plans are already in progress but we can’t reveal them yet,” Luukanen teases.

Asqella is also not excluding the potential of working with organisations such as the ‘China Finland Golden Bridge Innovation Center’. An organisation aimed at improving business cooperation and innovation exchanges between Chinese and Finnish hi-tech companies and investors.

But that stage will come later. For now, Asqella’s main focus in on bringing its camera to the international market. The big reveal is not far away — if you excuse the pun.