Espoo ranked the most sustainable city in Europe 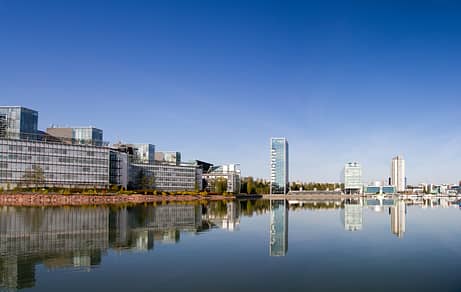 According to an international benchmark study, Espoo is the most sustainable city in Europe. The study showed that measured by the economic, sociocultural and ecological sustainability scores, the growth city of Espoo has managed to maintain its sustainable development. The survey was prepared for the Dutch presidency of the European Union, and it covered more than 140 cities in the EU. The study was carried out by Telos, an academic centre for local and regional sustainability studies at Tilburg University in the Netherlands.

Knowledge, safety and nature were highlighted as Espoo’s particular strengths in the study.

From a sociocultural perspective, Espoo’s scores for the level of education and income as well as for health are among the top scores in Europe. Its population is growing and people find the city safe. The city’s attractiveness is further enhanced by an extensive range of sports, culture and services on offer. Espoo residents trust the society and one another.

The level of greenhouse emissions in Espoo, already very low, continues to fall. The low level of emissions can be attributed to the Suomenoja heat pump station, the introduction of pellet-fired boilers at the Kivenlahti heat plant as well as low-emission electricity.  Both solar power and geothermal heat have also become more widely-used.

The introduction of geothermal heat has improved the situation, and Espoo will be the first city in Finland to test the renewable geothermal energy source, which produces completely emission-free district heat. St1 will start drilling seven-kilometre deep heat wells into the Otaniemi bedrock in the near future.

Espoo was also classified as a green city; this is mainly explained by the Nuuksio National Park, the Espoo Central Park, the long seashore and the abundant and easy-to-access natural environment.

Investments in research and product development

Espoo is a growth city and invests heavily in a network-like urban structure based on rail traffic. This improves its competitiveness, although the investments will result in severe debts. The costs of research and product development are also relatively high in Espoo.

According to Mayor Jukka Mäkelä, innovation and collaboration are the key elements in maintaining sustainable development.

“We promote the partnership and collaboration between the city, its residents, enterprises, Aalto University and other stakeholders in all our operations,” Mäkelä explains.

“Being a responsible trailblazer is one of Espoo’s values, and it involves the commitment to develop Espoo in a socially, ecologically and economically sustainable manner. A great example of this is the cross-administrative Sustainable Development programme, which has a steering committee where elected representatives and council employees work together to promote city-level sustainable development.”

“We are building a strong community, Espoo Innovation Garden, in the city. It offers great opportunities to improve both Espoo’s and Finland’s success on a sustainable basis.”

The complete report (in English) can be downloaded at telos.nl.

Kertomalla paranee project is looking for new solutions to improve the daily...