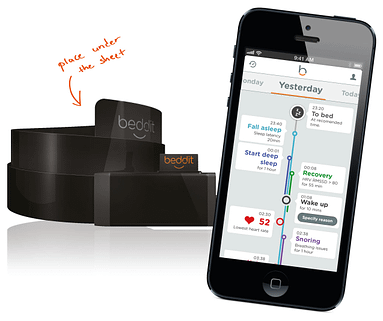 Sleep-tracking equipment maker Beddit has raised more than $500,000 with its campaign to launch a consumer-priced sleep sensor on the crowdfunding platform Indiegogo.

When it began its campaign on August 2, Beddit set itself the modest goal of $80,000. It reached that target in just six days and on Wednesday, the final total stood at $503,571.

Over 50 per cent of that came from the United States and the bulk of European contributions came from Germany, France and the Benelux countries.

The company, which is based in Finland and Silicon Valley, hopes to ramp up production by the end of this month with the aim of shipping orders in late November. Some 5,000 units have been pre-ordered and the plan is to build up a stock of another 5,000 to start with. Capacity is being ramped up to 10,000 units per month.

The company currently employs six full time employees in Finland and one in the United States though almost 20 people are working on this new project.

Beddit’s CEO Lasse Leppäkorpi, told Good News from Finland that he expects full time staff numbers to rise to ten by the end of this year and 20 by the end of next.

— One of the major challenges right now is to find the right resources for scale up in the United States and for sales and marketing in Finland, he said.

Leppäkorpi added that in addition to the sum raised, what has amazed the company are the number of high quality contacts generated by the crowdfunding campaign and the international media coverage.

— One of the key benefits is that many health tracking companies that we thought of as competitors have come forward as potential partners. They see us as complementing their offers.

— Also we have been contacted by bedding companies and other consumer product manufacturers who are interested in integrating the technology into their products. Before the campaign and the publicity and the traction, it was very difficult for us to contact these huge corporations. Now they have contacted us, says Leppäkorpi.

— In terms of potential business growth, partnering with other wellness service providers has opened other options than just traditional retail channels.

Beddit already makes sleep-tracking equipment for professionals like researchers, personal trainers and doctors but sought funding for the new consumer version of its mattress sensor and mobile app.

Unlike other sleep trackers on the market, Beddit is not wearable and it is automatic for the user. You simply place the Beddit ultra thin film sensor in your bed under the sheet and it automatically tracks your sleeping patterns, heart rate, breathing, snoring, movements and environment.

You can also view your sleep history and trends using the accompanying app. And the app can offer tips throughout the day to improve your sleep.