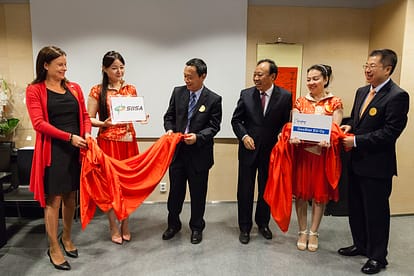 One of the leading geospatial information systems (GIS) companies in China officially opened its first office in Finland in Espoo in August, signaling an opportunity for Finnish businesses in this field to expand into the huge Chinese market.

Wuda Geoinformatics (Geo Star), which provides professional geospatial data production, processing services and software for governmental information management, is seeking to expand its cooperative partnerships in Finland as well as to act as a partner and consultant to Finnish companies wishing to expand into China.

— Our company is growing fast in China and we want to boost this growth by reaching out to other key international markets, such as Finland. Some Finnish companies are already doing business with us in China, such as Pegasor, but there is so much more that we can do with the help of Finnish expertise, says Geo Star President David Liu, whose company provides comprehensive smart city solutions by integrating geospacial information from numerous industries’ data stores.

— Geo Star’s new office in Finland means the Chinese company will now be able to close more deals with Finnish businesses and at a faster rate than before, says Juha Kaartinen, CEO of Pegasor, one of the leading technology providers in the field of air quality measurement and monitoring.

Kimmo Kanto, Director of large companies and public organisations at Tekes, the Finnish Funding Agency for Innovation, believes Geo Star’s move into Finland is a strong indication that Chinese companies are interested in doing business here.

Opportunity to expand into China

— Geo Star’s presence in Finland gives Finnish companies an opportunity to expand their connections into the huge Chinese market. Finland has a long tradition of high quality services in mapping and surveying and foreign businesses such as those from China value Finnish ICT expertise in this area, says Kanto, who has been following the GIS sector for 15 years. Both Liu and Jia Yaobin, Executive Vice Mayor of the central Chinese city of Wuhan where Geo Star has its headquarters, agree. — We know Finland is very strong in ICT and we are very supportive of Chinese companies’ expansion initiatives into Finland. We look forward to increasing business and governmental cooperation between our two countries, says Yaobin. 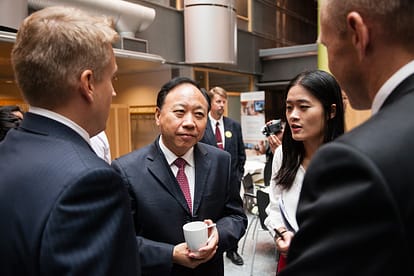 Jia Yaobin, Executive Vice Mayor of the Chinese city of Wuhan (second from the left), says he is very supportive of Chinese companies’ expansion initiatives into Finland. Photo: Seppo Samuli.