Apple Watch and €500,000 funding give Everywear Games a lift 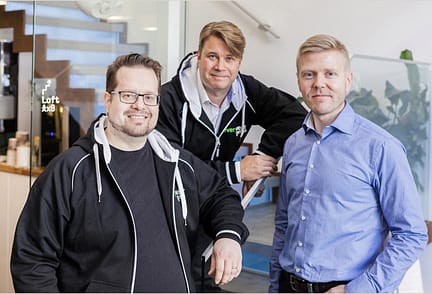 Lack of experience won’t be an issue for the world’s first wearable games studio, Everywear Games. Its founders Markus Tuppurainen (left), Aki Järvilehto, and Mika Tammenkoski have worked in the gaming industry for over 50 years combined. Photo: Jussi Ratilainen.

Finns have a track record of taking the world by storm with mobile and tablet games. The next logical step is…smartwatches.

Gaming and tiny displays aren’t an obvious mix to many, but Finnish gaming industry veterans Aki Järvilehto, Mika Tammenkoski and Markus Tuppurainen saw something when Apple announced its smartwatch last September: an opportunity to step away from the existing, saturated, gaming platforms.

“We got excited by the idea of a completely new Apple platform and one that is so different that content needs to be made for it from scratch,” explains Järvilehto, CEO of Everywear Games. “We sounded out our business plan with a few investors we know ten days before Christmas…On Christmas Eve we signed the papers for half a million in seed funding. It’s the fastest funding round I have ever seen.”

It was also the start of the world’s first wearable games studio. Backed by Finnish VC Lifeline Ventures and Copenhagen-based Sunstone Capital, Everywear Games was able to bring in two new team members and launch its first smartwatch game Runeblade concurrently with the Apple Watch in April.

“We have been joking that we are able to do something with a small team that would be impossible to do in this timeframe with a large team. The combination of a small team and outsourcing is the fastest way to get ahead,” Järvilehto says. “We are hiring vigorously but aim to keep our size relatively small.”

What Everywear has gained in speed, it hasn’t compromised in ambition. Instead of starting with a simple puzzle game, Runeblade is a full-blooded fantasy adventure game with spells, swords and monsters… yet tailored for smartwatch gaming.

In essence it is what Everywear calls ‘Twitter-sized entertainment’. Gameplay is stripped to its core and tailored for bite-size sessions, but builds into an in-depth gaming experience which can be enjoyed for months.

Currently the Helsinki-based company is working on expanding the world of Runeblade while a more casual second game is in the cards in the fall. For the time being, Everywear is solely focused on the Apple Watch as it wants to perfect the gaming experience on one platform before expanding to other wearables.

“Now there are a few other [smartwatch games] companies, but we were able to get a headstart on this platform,” Järvilehto says. “We aim to make our games the number one solution for this platform and define the consumer experience on it.”

While the funding from Lifeline’s Petteri Koponen and Sunstone’s Nyholm enabled Everywear to move quickly and grow, Järvilehto also emphasises the expertise the right investors bring:

“We think they are the best gaming investors in Europe. It’s fantastic to have them in our board to help to build the company,” says Järvilehto, who argues funding rounds shouldn’t be about selling or buying, but collaboration. He points out investors would often like to know the people they invest in.

What if you are a startup looking for funding but don’t know any investors?

“In my experience: network, network and network. The best way to get to known investors is in situations where you aren’t pitching to them,” says Järvilehto. “There are so many events such as Startup Sauna and others where you can meet investors. I warmly recommend startups to go and talk with them and ask openly what kind of cases they are interested in.”

However networks are no use if you don’t have an original and interesting idea, preferably one that is ambitious and has international appeal. Smartwatch games are a good example, but even they need a good business plan to back them up. And a great team:

“Gaming is an industry that creates value faster than any other, but it’s also notoriously tough for investors to assess. What is entertainment value and what will create a hit?,” Nikolaj Nyholm from Sunstone Capital explains. “The tight knit Finnish industry makes it easier to assess the quality of the team – absolutely the only thing that matters when investing in the earliest phases.”

Järvilehto also stresses the importance in understanding how investors work:

“It would be healthy at times to put yourself in the shoes of the investor and think why you as an investor would be interested in your case,” Järvilehto explains. “It would be great if startups read even one book targeted at investors. It’ll give them perspective on how investors work and choose their cases.”

And for those lucky ones who get to the agreement signing stage, Järvilehto gives one practical tip: don’t do it all yourself. Hire a lawyer who knows the local business environment and legislation.

Judging by the flying start of Everywear Games, better keep these tips close.

The article is published in cooperation with Good News from Finland.

Interested in deal flow from Finland?
Scroll to top