A globally unique biobank has been established in Turku

The new Biobank Act will come into effect in the autumn. The first clinical biobank in Finland is Auria, which provides a completely unique research environment. The biobank is also expected to create and attract medical business activity to Finland. 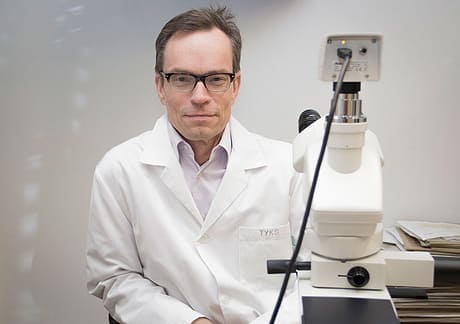 – As you can see, we are really excited about this, say Olli Carpén, Professor of the University of Turku, and docent Heli Salminen-Mankonen almost in unison. The University of Turku and the hospital districts of Southwest Finland, Satakunta and Vaasa have agreed to set up the joint Auria Biobank.

At first, Auria Biobank consists of human tissue samples collected from patients in Turku, Pori and Vaasa for nearly a century. The data from the past 20 years are in electronic format: 400,000 samples from 200,000 patients. The tissue samples in the archive have been cast into paraffin blocks, which can preserve, for example, the DNA of the samples for at least a century.

Thanks to the new Biobank Act this national asset can be utilised in medical research without heavy bureaucracy from this autumn on.

– The biobank can provide a large number of samples combined with significant information about the progression of the patients’ disease, sums up Olli Carpén, Professor of Pathology.

Researchers can quickly find, for example, cancer samples of a certain type in the biobank. They can then, for example, analyse the DNA-mutations in the samples and add the results of the research to the bank.

– The database of the biobank will be growing continuously. The idea is that, for example, the raw data from the sample research are entered into the biobank, which makes the information provided by the bank ever more valuable, Salminen-Mankonen says.

The biobank could raise Finland to an attractive research subject

There are large sample archives also in other parts of the world, but the newly established biobank is still a globally unique environment. Carpén lists many reasons for that.

First of all, Finland has a strong public health care in which everyone operates in the same environment. In some countries, for example diagnostics and patient care are done by separate companies, which means that a biobank like this is not possible. Secondly, several countries do not have social security numbers making the collection of the information difficult.

As a third point, Carpén mentions legal issues. In several countries, legislation makes uniting and utilising the information in the samples very hard or even impossible. Fourthly, in several countries, people are not as aware of the usefulness of biobank activity and do not want to donate samples for research purposes.

– According to the latest Eurobarometer public opinion survey, 98% of Finns are willing to donate their tissue samples for research through the biobank, Salminen-Mankonen adds.

The biobank could raise Finland to an interesting country in medical research. The bank is hoped to tempt large medical actors to Finland to do tests with the newest medications.

– This is a great opportunity to gain considerable new national and international business and research activity. And what’s more, it will be useful for the patients in our hospital districts, Carpén tells.

The samples are stored in the bank anonymously

The amount of tissue samples in the biobank will grow continuously. Along with the new Act, patients will need to give their consent for using their tissue sample in research through the biobank.

The patients’ personal information will be safe in the biobank because the samples in the bank are anonymous. Researchers do not know which person any given sample belongs to. The director of the biobank can deactivate the encryption of the personal details only in exceptional circumstances.

– If there is, for example, a new medication available for a certain disease, the director can deactivate the encryption of the personal details. This way, we can find out which patients might benefit from the medication. The biobank can hence be a life insurance for some patients, Carpén tells.

According to the Act, people also have the right to know the studies that their sample has been assigned to. Upon request, the biobank director can, by deactivating the encryption of the personal details, tell which studies a certain person’s tissue sample has been used in. However, it is not possible to give personalised research information about a sample.